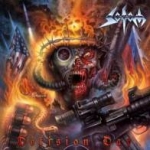 The first SODOM record I ever bought was the "Mortal Way Of Live“ double album back in 1988 when I was 14 – for two reasons: one, it was 2 records in one for a good price. And two, the cover was "censored" by a black piece of cardboard because it was deemed obscene. Me, being a sucker for 80s Foxy Lady porn, I knew I would be in for a treat. Win / win for a pimply teenage Thrasher! I had known them before, of course, but this was my first purchase. "Persecution Mania“ was great as well, and so was "Obsessed By Cruelty“ and especially "In The Sign Of Evil“ with its youthful satanic Prince Valiant-haircut naivety. Then came "Agent Orange“ (which is still one hell of a ripper!) and they toured with SEPULTURA when "Beneath The Remains“ came out and my life has not been the same ever since. Fast forward to 2016, enter "Decision Day“, SODOM album number 15. Fucking fifteen and they still do what they have always done: Thrash. "Decision Day“ is anachronistic in the best of ways: the cover shows an American and a Russian flag, and it makes me want to bash them over the head as a fucking reminder that yes, the Cold War is over. But then again, so is Thrash Metal and this riff-o-rama still works. SODOM still have songs about the atrocities of war and the evils of religion and the old tried and tested formula works surprisingly well: just like MOTÖRHEAD or the RAMONES, there is simply no need for SODOM to do anything else than what they’re good at. But – with a capital B – one thing that fucking bugs me is this: you are a band, you have a new album out named after D-Day, and you are from Germany, so why the fuck would you write vague lyrics about fighter jets and bombs when you could seize the opportunity and celebrate the beginning of the end of the Third Reich? To each their own I guess (pun intended), and yes, the 80s were simpler times, but hey – a missed chance is a missed chance. But fuck it. Fuck it all to hell and back, DISCHARGE were never outspoken either, and they still do their thing, just like SODOM do. I’ll fight my own battles, and getting older means that I really don’t need a musician to think for me. But I’ll be the first to admit that this new SODOM record is a nice relaxant between battles, both personally and politically. It takes me back to when all I really cared about was beer, skateboarding and extreme music. I haven’t changed all that much, and neither have SODOM. And that’s good. www.facebook.com/sodomized, www.spv.de