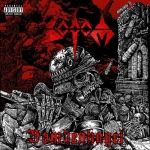 We need to ask an important question, what actually happens when a new line-up records old songs? Is there new energy? Are the band’s trying to plug in obvious leaks on the production? Are there parts of the track which didn’t go as planned? Or do they simply hate the original version? Or maybe the producer? Or do they just like the original song too damn much? This question has been of interest to me for a long time and I often discuss this with friends. Well, a friend of mine said “They’re doing what they’re doing, just let it be!” which deflated my interest and managed to calm me down. ‘Bombenhagel’, the first track on this 2021 release, is the last track off “Persecution Mania”, originally released in 1987. The 2021 re-recorded version is clearly missing the muddy underground feel of the original track, but nevertheless holds on its own very well. ‘Coup De Grace’ starts off with your typical break-the-stuff kind of intro and frankly sounds pretty kickass. I can hear all the instruments, it doesn’t sound like a salad of heavy notes and the vocals are raspy enough to not bother you. SODOM’s still got it! I mean who would’ve thought after countless years and albums later this band would still be alive and kicking? I certainly did not. For me “One Night In Bangkok” is the peak of SODOM. Anyway, not to digress, ‘Coup De Grace’ is entertaining enough, the drummer keeps excellent time, yeah, that’s actually pretty much everything that can be said about the drumming on this EP. It’s a standard Thrash song that you wouldn’t immediately pick out from their extensive catalogue. This makes for excellent driving material though. The final track ‘Pestiferous Posse’ follows the same format, an explosive intro and then it’s standard rhythm. Frankly, it’s fine. I’ll still go see them live anyday. I know the purpose of this release is to keep the brand kicking around and in creating a small flutter prior to another full-length. Nevertheless, SODOM’s managed to do just fine. For more information, please visit www.facebook.com/sodomized, www.facebook.com/spvsteamhammer