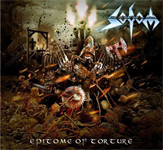 Of all the enduring old school Thrash bands that influenced so many of today’s underground heroes, SODOM is the sole remaining representative of the golden era that has never compromised their sound and approach. This is a big deal. And apart from a brief break in the mid-90s, Angelripper has driven this Thrash Metal freikorps with a dedication unmatched by any of his peers. Yes, Sodomaniac I am – and have been for nearly three decades, but this will be no rubber stamp approval of whatever they happen to have put out. No. I will say up front that the Waldemar Sorychta production on "Epitome Of Torture" is too clinical for its own good. It has muted the band’s trademark gut-churning chaos, to an even greater extent than on the otherwise excellent "In War And Pieces". Reminds me of when Charlie Bauerfeind worked with VENOM. Both Sorychta and Bauerfeind are unquestionably great producers, but in these particular cases working outside their typical musical environments. It’s true that erstwhile SODOM producer Harris Johns is a perfectionist in his own right and achieves just as professional results as Sorychta and Bauerfeind, but this writer believes Johns is the only producer that can harness this band in studio by promoting the band’s soul. He also knew when Angelripper’s snarling bass was too low in the mix. Anyway, now for what’s right about the album; the music. I’ve long believed Bernemann is the guitarist SODOM has always needed, and its been great to hear the band evolve since his arrival in 1996. Once again his riffing and leads prove every bit as memorable and consistent as Angelripper’s iconic gravelly vocal cadences and roars. Combine these and you get memorable tracks like the archetypal ‘Stigmatized’, as well as ‘My Final Bullet’, Epitome Of Torture’ and ‘Into The Skies Of War’. In the schlachtzeug department, the departure of Bobby had worried me. However Makka’s more speed-oriented style proves important to sustaining the album’s aggression and impact in the face of its uber-polished production. The two extra tracks on this special edition, ‘Waterboarding’ and ‘Splitting The Atom’ seem to these ears to be somewhat experimental, which makes their omission from the regular version a wise move. But overall, thematically the band remains as conservative as ever. Cover art and packaging is much like it was for "In War And Pieces". There is a booklet of respectable size, but no surprises in photos or layout. Nothing new in song topics or titles, either; war, violence, death, social controversy. Now, some of us positively adore the old days when Angelripper’s command of English was weak and gave us incomprehensible, side-splitting quotes. While his day-to-day English might be considered fluent, there is no shortage here of questionable words and baffling ‘let me just read that again’ lines. Blue ribbon moments: "Arouses me lecherous…", "Decivilized my grace…", "How black the sap of disembowels could be…", "Where once was a man, is a gnome left now…", "The axe came breaking down…" and of course Messr Angelripper’s crowning Fanzinenglish glory, the pismonunciation of ‘epitome’ as ‘epitomb’. Yup, this one’s a keeper. www.sodomized.info, www.facebook.com/sodomized, www.spv.de