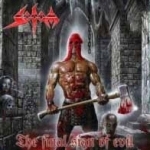 After their half-assed self titled 2006 album here we have the German masters of Thrash Metal striking back with a somewhat unexpected collection of songs. Personally, I was seeing something like this coming after all those "reunion" gigs they have been pursuing lately. What really caught me off-guard was the fact they went far back in their history to the point of re-recording the whole "In The Sign Of Evil" and adding some bonus to make it a complete album (well, it was originally supposed to be a full length already back in the 80s, but the record company decided to test the market with only a mini album first – Frank). I would have expected something similar to what DESTRUCTION did on their last album. Now, back to the music itself, they have succedded to recreate a raw ambience for the old songs as well as including additional material that even after all these years seems to fit the original EP material given their primitive nature. Let’s face it, these new tracks are advertised as "the seven additional tracks are not a real bonus, because they fulfill an album, like it should (have been done) back in 1984" but in my opinion that is plain bullshit and the sole purpose of having this "unreleased" tracks into the new version is because to make the whole thing more attractive (no, that statement is really the truth! – Frank). It is funny how the songs flow because it makes me remember the sometimes sloppy performance of SODOM back in the day given their lack of experience with their instruments. If you listen carefully to the new versions it’s definitely obvious that at least Witchhunter and Grave Violator had quite a bit of trouble exercising their rusty gears due to their inactivity in the scene. Grave Violator’s guitar playing eventhough inspiring for a whole generation of Death / Black musicians is anything but brilliant. Witchhunter’s once outstanding drumming abilities are just a shadow of what it used to be and Angelripper, while being active all these years does not sound as "evil" as these songs originally were recorded. Time passes and leaves its trace… Get this album just for the sake of nostalgia but do not expect anything really overwhelming. Contact the band at: http://sodomized.info.