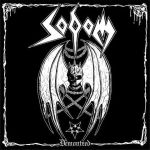 I was lucky enough to be growing up in a city that had a great Metal record store in the 80s, so apart from being exposed to literally everything that came out at the time, I had access to the wonderful miracle of demo tapes. And Lord Satan knows I bought them all: from tight spandex Speed Metal to raging Hardcore Punk, if it was on tape and for sale, it was mine. Hardly anything can compare to the magick that came from these tapes: crudely photocopied covers and crudely recorded noise, just as it was meant to be. Here we have the two SODOM demos in all their unholy glory… and crude is an understatement. There just is no debating that "In The Sign Of Evil" is an eternal masterpiece – not despite the sloppy playing, the walkman-in-a-cookie-box recording and the juvenile lyrics, but because of it… but what we have here is harsher, wilder, noisier and way, way more Neanderthal in spirit and execution, and hardly even sounding like the SODOM we all know and love. "Witching Metal", the first demo, dates back to 1982. This was a time when there wasn’t even a "Show No Mercy" in record stores, so yes, it is truly pioneering in terms of speed, heaviness and ferocity. Four songs, all killer, no filler. The second demo, "Victims Of Death", is only two years younger and slightly more mature in every aspect. The sound is better, but still as far away from a studio production as DEF LEPPARD is from not sucking. All four "Witching Metal" songs have been re-recorded here and as much as I love straight up noise, I’ll have to admit that the new and improved sound suits them well. To wrap things up, this is extreme Metal history class… literally nothing sounded just like SODOM at the time, and even SODOM had a hard time keeping up the rhythms and sounding like SODOM. But the raw and evil energy makes up tenfold for what these recordings lack in musicianship. And no, I don’t care what you say… this is the first wave of Black Metal. The refined and defined Satanism came only years later, but it was bands like SODOM, VENOM and BATHORY who made the Devil proud with their youthful fanaticism and inspired legions of pimply teens to pick up instruments and bash out heinous raw noise. When all is said and done, these demos certainly are not for everyone. In fact, they’re hard to digest even if you like MÜTIILATION or any other band with a crappy sound. But they have value that goes way beyond nostalgia or a history lesson: good songs will always sound good, even if the medium is a wax cylinder. And I know that Frank will complain that this review is a bit on the short side (huh??? – Frank), but there’s only so many words that can describe raging violent tuneless thrash. You will have to listen. www.facebook.com/sodomized, www.flogarecords.com