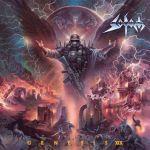 What can I say? There are bands that rarely disappoint and SODOM are one of them. After the 2018 purge, when Tom Angelripper fired Bernd “Bernemann” Kost and Markus “Makka” Freiwald (the mighty Konrad “Bobby” Schottkowski left the band in 2010), I welcomed the comeback of Frank Blackfire, the guitarist responsible of classic Thrash Metal albums such as “Persecution Mania”, “Mortal Way Of Live” and “Agent Orange”. Unfortunately the first release of the new line-up, the 2018 EP entitled “Partisan”, was half a disappointment to me, especially because of the boring Crust / Punk influences and of the poor performance of drummer Stefan “Tormentor” Hüskens (ASPHYX, METALUCIFER and ex – DESASTER). The new line-up sounds more solid and better amalgamated: Tom on bass and Frank on guitars, plus two pretty unknown musicians (Yorck Segatz on guitars and Toni Merkel on drums). “Genesis XIX” offers to the listener 12 songs for almost 55 minutes of old school Teutonic Thrash Metal. The whole concept and lyrics deal with violence, blasphemy and war, in the purest SODOM tradition. The album isn’t raw as “In The Sign Of Evil” or “Obsessed By Cruelty” and neither as brutal as “Tapping The Vein” or “Code Red”, but it’s a fair compromise between “Persecution Mania”, “Agent Orange” and “M-16”. The classic SODOM sound is guaranteed: the MOTÖRHEAD influence, the violent and catchy riffs, the brutality and the raucous Tom’s voices. The Crusty / Punk mood is still present, but it’s not as sloppy and uninspired as on “Partisan”, on the contrary it reminds of classic and legendary songs such as ‘Ausgebombt’, ‘Bullet In The Head’ or those from “Masquerade In Blood”. Regarding the production, I can’t say anything more than that it’s perfect; the same about the cover artwork. An extra point goes to the slight Death Metal influences, where MASTER and Paul Speckmann come to mind, especially in the D-Beat galloping parts. In conclusion, “Genesis XIX” is a killer album, a breath of hope in this troubled time with few releases and zero gigs. Buy it and support the underground! On SODOM you can always count: it’s a guarantee, even more now with Tom and Frank. And I’m sure that Chris Witchhunter (R.I.P.) would approve. www.facebook.com/sodomized, www.spv.de