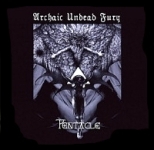 This material was originally supposed to come out as a 7" EP on Metal War Productions (after the original idea of doing a live split release with BLOOD STORM fell through), but due to financial problems at the label side, the whole idea had to be canceled. In the end Holland’s From Beyond Productions took care of the whole project and even suggested to do a 10" instead of a 7", which the band of course quickly agreed on. So, after four long years (since the original idea) it is finally out now, nicely packged, with a gatefold sleeve, including an A3 – sized poster of the artwork. Two songs are featured, ‘A Hellish Descend’ (the first song that PENTACLE wrote after their "Ancient Death" MCD) and ‘Blast Them From The Sky’. Both were recorded at Harrow Productions during the "Under the Black Cross" sessions back in September 2004 and both easily live up to the high standard of the album. So, don’t expect any lame outtakes, that weren’t good enough to make it on "Under The Black Cross", but crushing old school Death Metal in the best possible PENTACLE manner! I really hope to see them materialize on CD as well sometime in the near future. Until then, vinyl junkies are adviced to buy this extremely cool (soon to become) collectors item! (Hey Wannes – for some strange reason I didn’t find the promised 100,-Euro note for the good review in the sleeve, but I think the fact that Mike is wearing a Voices shirt on the backcover makes up for it!). www.pentacle.nl