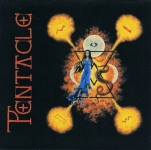 A couple of years ago Wannes of PENTACLE kindly used to send me a CD-R of all the old PENTACLE material, that had been recorded prior to their first full length, "…Rides The Moonstorm". Since I don’t listen to tapes and vinyl anymore (yeah, I’m fuckin’ untrue – I know), this way I was still able to give those songs a spin whenever and wherever I was in the mood for some classic old Dutch Death Metal. I always thought that this would make a very cool "official" release, and you know what? That’s exactly what the Vic Records double CD "The Fifth Moon… Beyond And Back" is all about… and more! What you get here is PENTACLE’s mini CD "The Fifth Moon", the "Exalted Journey" 7" EP, the "Winds Of The Fall" demo and the "Caressed By Both Sides" rehearsal demo plus the "DSFA 6 – Paradise Of The Underground" compilation track, an outtake from "The Fifth Moon" session and a rehearsal track from 1990. So, basically all what PENTACLE had officially recorded up to "The Fifth Moon". Basically? Yeah, because unfortunately the band’s cover of the HELLHAMMER classic ‘The Reaper’ (which was on "Caressed By Both Sides" and the picture disc version of "The Fifth Moon") had to be excluded due to royalty reasons, which is a pity. But hey, if you check out the highly impressive 32 pages fat booklet, you’ll certainly agree that it definitely makes up for it! It features tons of old pictures (most of them never before seen), flyers, press coverage and highly interesting liner notes from Wannes. Instead of writing them down in the usual way, he came up with the cool idea to comment each of the featured pictures, which results in some interesting anecdotes from the glorious past. I have no idea though, what kind of drugs Wim Baelus had been on, when he wrote the booklet’s introductional page, hahaha (Wim originally used to release PENTACLE’s "Exalted Journey" EP on his legendary Midian Creations label). Musically "The Fifth Moon… Beyond And Back" showcases pretty well, how PENTACLE evolved from a still rather immature and doomy sounding unity (with a more guttural vocal approach), into the mighty force they are today! It definitely helped them a lot that Wannes constantly tried to improve his vocal style, because in retrospect his original way of grunting probably would’ve been too one dimensional in the long run. And in my personal opinion ‘A Dance Beyond’, the rather complex structured and pretty long track on the "DSFA" compilation, doesn’t really fit the band’s wellknown style anymore either (I guess we can file that under "experimental stage"). PENTACLE always incorporated simple, straight ahead, true old school Death and Thrash Metal influences into their own material and while listening to their material on this compilation in a row nowadays, it’s more obvious than ever that bands like HELLHAMMER / early CELTIC FROST, old POSSESSED, old DESTRUCTION, old DEATH and maybe even some classic ASPHYX left their traces here and there. So, if your tapes and vinyls are already worn out or if you missed out on PENTACLE’s early days, "The Fifth Moon… Beyond And Back" is a great opportunity to (re)discover some old gems for sure! For more information, check out www.pentacle.nl, www.facebook.com/pages/pentacle/86420806112, www.vicrecords.com