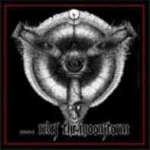 It is extremely difficult to be objective when talking about a band you totally worship. Especially when you happen to "know" the people behind the band and you loyally follow every single footstep of theirs. It might sound naïve, stupid or whatever and I certainly don’t care, but the truth remains that PENTACLE is the most important contemporary underground Death Metal band. Since SADISTIC INTENT remain in what appears to be an eternal slumber, I doubt that there is going to be any other band capable to approach the Death Metal throne from which PENTACLE reign supreme for the past couple of years. Most of the band’s past releases are nowadays out-of-print and it’s really strange that no one has been really interested in re-releasing their classic releases. Hopefully the situation seems to be changing since Dennis of Kneel Before The Master’s Throne Records decided to re-release "…Rides The Moonstorm", PENTACLE’s titan debut full-length album, originally released by Damnation Records eleven years ago on CD and double LP format. If you don’t know the music of PENTACLE then you should seriously consider stop reading Voices! Period! For the infidels who dare to admit that they haven’t experienced the force of PENTACLE, these Dutchmen play a blend of ancient Death Metal that is inspired by old 80s masters such as CELTIC FROST, POSSESSED, PENTAGRAM (Chile), NECROVORE etc of course with loads of personality and identity of their own! So if you still wonder, then you better stop reading right now and go buy all of their albums! Contrary to the initial pressing of "…Rides The Moonstorm", what we have here is an impressive, deluxe packaging that unfolds to what appears to be a "cross-like" four-fold digipak. Every panel of the cross contains a band member’s photo accompanied with comments from each member respectively reminiscing the album’s recordings and the particular era in general. Some pretty cool details are mentioned that certainly provide an insight on the album. On the other side of each panel you can find some pretty cool picture collage showing PENTACLE in action. Luckily a rich, thick booklet is also included containing an improved design with new lettering (also appearing on the digipak panels) and is full of lyrics, liner notes from Wannes with comments about each song and the respective lyrics-theme plus some extra clippings from magazines. The music content remains the same compared to the original version and as Wannes mentioned, this was done intentionally to preserve the original essence of the record. A wise decision if you ask me, because the album is pretty much an "entity" of its own. Besides the lack of new material, the re-release of "…Rides The Moonstorm" looks so damn impressive, noble and luxurious that I doubt if any PENTACLE fan would resist the temptation to purchase it. I would suggest to hurry because it might be soon sold out! By the way, Dennis has also released a bunch of nice-looking "…Rides The Moonstorm" t-shirts and sweatshirts that you definitely don’t want to miss out, so act fast! I only hope Dennis persuades Wannes to re-release the album on PicLP format (for the very first time)! Not much more needed to be added except from… Never forget to support mighty PENTACLE because the Ancient Spirit will forever rule!! More info: www.mastersthrone.de, www.myspace.com/mastersthrone, www.pentacle.nl 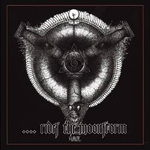 The good guys from Iron Pegasus Records reissued another classic: PENTACLE’s terrific debut album "…Rides The Moonstorm". Both the label and the band needs no special introduction to old underground Metal maniacs, but as there is a chance some younger Metal worshippers will read this as well, few words, just for the record. "…Rides The Moonstorm" originally came out in 1998, and includes 9 tracks – and so is this reissue, as there are no bonus tracks here. Fear not, this reissue is worth its price, as first of all this album is pretty rare these days, but also the Iron Pegasus guys packed it along with a great 24-pages booklet. Pure ancient Death Metal from the very depths of hell, inspired by, or comparable to such old school legends as CELTIC FROST, early DEATH, ASPHYX or even early OBITUARY (especially when it comes to vocals), heavy as hell and cram-full with good riffs – less or more it’s how we can describe PENTACLE. It was a good idea to reissue this material, as the band is pretty active again – catch them on tour, and check out their brand new MCD "Five Candles Burning Red" as well which will also came out this summer. More information at: www.pentacle.nl, www.facebook.com/pages/pentacle/86420806112 and www.iron-pegasus.com