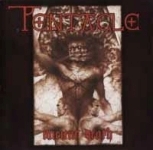 Our buddies of PENTACLE are also still alive and well and released right before their mini-tour with DESASTER, this very entertaining piece of mayhem! The album kicks off with a furious new track ‘Prophet Of Perdition’ followed by a re-recording of their golden oldie ‘Descending Of The Soul’ (originally on their one and only demo “Winds Of The Fall”, the new version doesn’t sound very different compared to the original though). It continues with the very obscure DEATH cover ‘Legion Of Doom’ and a new (and to my opinion the best) track ‘Immolated In Flames’ (very fast and tight with a killer riff which returns quite often throughout the song). To finish, you get another DEATH cover ‘Witch Of Hell’ (you can easily hear the typical riffs in there already which later on would define the sound of MASSACRE) and the very extreme ‘Walking Upon Damnation’s Land’ (very brutal and fast) with some guest-vocals of K.K. Warslut of DESTROYER 666. PENTACLE still stick to their very original and own old-fashioned Death Metal sound (what else did you expect?), somehow they are one of the very few bands that really totally breath this kind of music and have a feeling for it. An extra compliment goes out to them for the choice of the DEATH covers which is really original as only the die-hards will be familiar with them (as none of the covered tracks ever ended up on a DEATH album) and totally shred (especially ‘Witch Of Hell’)! “Ancient Death” got recorded at the Harrow studio (same studio where the last ASPHYX album and most of the PENTACLE material got recorded) and still features original drummer Marc Nelissen who left the band about a year ago. “Ancient Death” is really an excellent release, worth your well-earned money. It’s great to see that their own material is very good again as their last new song (which you can find on their split-10″ with DESASTER) was about one of their first tracks which disappointed me somehow. Anyway, if there would be any justice in this world, PENTACLE would also get to the same level sales – and popularity-wise as for example DESASTER with this release. I mean, their “Rides The Moonstorm” album was just excellent and they haven’t put out any really weak material so far throughout their career, what more can you do as a band? 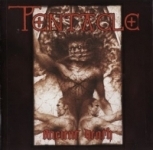 In case you’re wondering why there’s another feature on this MCD after such a long time since its original release let me explain it to you in a few words. Hollands Damnation Records unfortunately ceased to exist a while ago and in order to give this brilliant PENTACLE material a proper US release (as well) Dark Realm Records picked up on it recently and re-issued it with some improvements. If you already read Steven’s review above, I suppose I don’t have to talk about the excellent material once more, as it speaks for itself and easily blows away most of the stuff that’s out there these days! But this new version not only has a better quality back cover, it also comes up with the additional bonus track ‘Soul’s Blood’, which previously was only available on the vinyl split 10″ with Germany’s DESASTER, “Desaster In League With Pentacle” back in 2000. This way all of you CD maniacs will finally also get a chance to hear that brilliant PENTACLE tune as well (and justice for all, hehe…)! So, if you – for one reason or another – missed out on the European version of “Ancient Death” make sure to finally get yourself a copy of this one here as it, without a doubt, features PENTACLE’s best work yet! www.darkrealmrecords.net