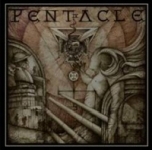 I bet there are quite some Voices-visitors out there who have waited anxiously for PENTACLE’s newest attack and the various delays because of technical problems, if I remember correctly, made things only worse. Now I finally hold this newest strike of “ancient Death” in my hands and though it appears to be a more of a “grower” it is 100% PENTACLE and should not disappoint any fan of this band. Wannes vocals are still the same, this very Van Drunen / Tardy-like old school scream- / growling, the riffing quotes all kinds of old school Thrash & Death Metal from FROST / HELLHAMMER to NECROVORE and with the occasional relatively twisted song structures mounts in a fascinating piece of Death Metal, that does not wear off as soon as many other releases do nowadays. The lyrical side of “Under The Black Cross” is also quite interesting and rather untypical for PENTACLE, because for the first time they created a concept album dealing with a story from World War II (a topic untouched by this band so far, I think). The eight songs offered here (among which is one instrumental) are not as accessible as the ones on the “Ancient Death” release, but if you give the album a few spins the magnificent riffs (e.g. in ‘March Of The Campbletown’ from 2:45min on comes a hellish OBITUARY – like brainmelter-riff, killer!!!) and the “hits” (e.g. the duet with Chuck Keller / ex-ORDER FROM CHAOS, VULPECULA, ARES KINGDOM ‘(Storming Through A Hail Of Steel’) will surface and reward you double-time in the end. “Under The Black Cross” is not just a dull old school blast, but a highly varied, intense and addictive album exposing more and more qualities with every listen. And, regarding the production-side of this release, the word “perfect” says everything! Buy or “await the blast of death”!!! www.iron-pegasus.com, www.pentacle.nl 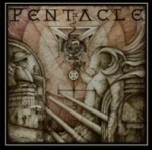 If you are a serious Voices reader and don’t already own PENTACLE’s “Under The Black Cross” album, you should stop reading this very instance and go get it, no excuses here!!! For the rest of you, loyal PENTACLE worshippers, what we have here is the much anticipated re-release of the classic (by now) second PENTACLE full-length album. Originally released by Iron Pegasus Records, it now got re-released (for the US market) by John McEntee’s label Ibex Moon Records. I was quite skeptical with that re-release in the sense that Costa treated it in the best possible way (releasing it in jewel case, noble LP / PicLP format, the latter with booklet and sticker) and since I already owned all previous album formats I was wondering what more goodies we could get out of this specific PENTACLE period. Beginning with the exterior of this re-release, the album is hosted in a nice digipak case with the two sides of the right panel containing the album lyrics (for the first time in a CD version, only the booklet of the PicLP version contained them so far) and a left panel with a great illustration in the mood of the album concept (already contained as the “alternative” PicLP cover and limited “Many went… few returned” t-shirt design). Besides the nice digipak, you will also get the same booklet as the jewel-case Iron Pegasus version but with a bit darker colors in the cover print. But enough with the packaging / layout part, let’s go to the “juicy” and most important part of this re-release… which is no other than the INCREDIBLE and fucking “skullcrushing” cover version of the all-time classic NECROVORE track ‘Divus De Mortuus’. What the fuck can I say about this?? That’s by far the best cover PENTACLE ever did in my opinion and I guess that also due to the fact that NECROVORE has been a big influence in the sound of the band. The band has managed to get into the spirit of the original and delivered it in an excellent way during the “Under The Black Cross” sessions. Wannes sounds like being possessed by the same demon that once possessed Jon DePlancett (in the good old NECROVORE days), but in the PENTACLE case, Wannes delivers the track with his unmistakable vocal-style, making obvious that he is by far the top vocalist in ancient Death Metal right now. To sum up this re-release is essential even if you own all other versions and even if the NECROVORE tribute never gets released, we have to thank PENTACLE for bringing forth the definite version of one of the most sinister Death Metal tracks ever. Support them if you haven’t forgotten the Ancient feeling. But remember, it still rules… www.pentacle.nl, www.ibexmoonrecords.com