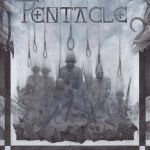 Netherlandic band PENTACLE have been around since 1989, with their old school blend of fist-pumping guitar / drums co-dependency along with vocals that continue to sound like the devil himself has chainsmoked for the past 10,000 years. Wannes Gubbels (vocals), who you may remember from ASPHYX for a while, has been with the band since the beginning along with guitarist Mike Verhoeven. Along with drummer Robert Smissaert and other guitarist Alex Verhoeven, PENTACLE are a consistent band that stays true to the genre in their solid, head-banging songwriting. ‘Behold… Denial, Despair And Cruelty’ starts the album off in a fast-paced, full-of-energy mass of angst and power. The band’s been around for decades, and it shows through their talent and tightness. Their strength is simply creating Death Metal that brings us back to why we started listening in the first place. The gurgling, chortling guitars at the beginning of ‘I Christen Thee Doom!’ lead into an "Uahhh!!! before staggering into a full-blown pit-fueled sonic explosion. ‘Now Spit Forth Death’ (what a fucking excellent song title!) stomps and barrels its bulky mass through the crowd of peasants running for their life, then erupts in a blistering array of destruction. The bass in ‘Blessed By Fire’ makes its way into the forefront briefly, ushering in a slowed-down, almost doomy track which builds to a mid-paced speed for the remainder of the song. ‘The Fury Of Retribution’ is just as the title suggests… a vengeful delivery of swarming guitars that signal the advance of what sounds like one million bloodthirsty barbaric demons. The second half of third full-length "Spectre Of The Eight Ropes" (yes, only three studio albums in all this time) is as good as the first half, with songs like ‘Mesmerizing Depths Of The Abyss’, ‘Bound By Death’s Ropes’ (a furious piece) and ‘Emerging From A Sea Ablaze’. The album ends with a nice rendition of NECROPHAGIA’s ‘Forbidden Pleasure’. Fans of PENTACLE won’t be disappointed. Three decades into their career and they still sound as fresh and hungering for Metal madness as they did early on. For more information, check out www.facebook.com/pentacle-86420806112, www.iron-pegasus.com.