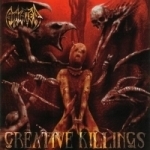 SINISTER is back with their first album for the new millennium, with a new record contract and new line-up. I have never been a dedicated fan of the band in the past, because I saw this four piece always coming with cool but somewhat run of the mill material. It is true the band have remained faithful to their roots and stayed far away of the hottest trends of the day throughout their more than ten years long career, creating a sound of their own instantly recognizable among a crowd of copycats. But on the other hand, SINISTER never came with a groundbreaking classic album which could have put them among the ranks of the elite. I am sorry to say the story repeats itself with “Creative Killings”. The album is strong enough to make fans of brutal Death more than happy, but to listen to it in its entirety could be a boring experience, because all of the songs tend to sound the same after a while. The SINISTER music is essentially based on heavy splattering riffs, somewhere between slow and mid-tempo, with some frantic outburst of speed here and there; but unfortunately all the song are structured the same way. I have found two standout tracks on this album though: ‘Moralistic Suffering’ and ‘Altering The Beast’, in which the band experiments something newer and which break the monotony of the whole. But the real shame comes from the fact the best track of “Creative Killings” is the cover of the POSSESSED song ‘Storm In My Mind’ (from the “Eyes Of Horror” MLP), perfectly played the SINISTER way, and where the band show their full talent. New singer Rachel (ex-OCCULT) handles her duty with passion, and the excellent production compliments her deep and growling voice very well, expect a sick performance! The lyrics are interesting to read while the music flows, and SINISTER escape the trap of gore for gore’s sake and instead choose a more abstract way to express the violence and brutality of our time (for instance, I think the song ‘Reviving The Dead’ is about the ethnic war in Rwanda). Add to all this the beautiful cover art by Jon Zig (visit his site at www.jonzig.com, it is worth the try!) and you obtain a very good but a somewhat restrained offering in the end.