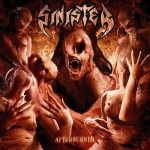 Back in 2003, SINISTER announced their disbandment. Two members, Aad Kloosterwaard and Alex Paul, formed a project called NO FACE SLAVE. However, the material they recorded under that name sounded so much like SINISTER the band was reactivated in 2005. This album, "Afterburner," is most of that material. Listening to this it’s not hard to see why the decision was made to bring SINISTER back. The first song, ‘The Grey Massacre’, sounds like a SINISTER song. It has brutal, choppy riffs, furious drumming, and intensity. Apparently this was the first record on which Aad Klosterwaard sings, having been the drummer on previous albums and recordings going all the way back to 1988. If you’re a fan of early SINISTER, this may not be your cup of tea as it is a continuation of the style they reached on 1995’s "Hate" and 1998’s "Aggressive Measures". There’s more melodic scale type things but it’s not a radical departure. Still SINISTER, still brutal. Then as a nice contrast, ‘Men Down’, comes on to remind us SINISTER can still bring the brutality. This song in particular has a little too much sampling of dialog from the movie "Black Hawk Down", though, but it’s still cool. The title track is a bit dull, as is the one after it, ‘Presage Of The Mindless’. If it was condensed somewhat from its length of 7:38, it would be much better. Instead there’s too much filler but otherwise a still good SINISTER song. Much of ‘Into Submission’, sounds like a reprise of ‘Cross The Styx’ so in that way I can appreciate it, but then again we (hopefully) have heard ‘Cross The Styx’ so much one might as well just listen to that song. The rest of the album is cool, but it does sound more like SINISTER going through the motions of a personal style they established on previous albums. However, I will not say it isn’t a worthy album or indeed say that it isn’t a true SINISTER album. This is their sound and this is what they do. I respect them a lot but like you I’ll probably listen to the older albums before giving this one another spin. www.sinister-hailthebeast.com, www.facebook.com/pages/sinister-official/255145351172432, www.facebook.com/metalmindproductions 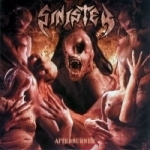 I think that, like every fan of the band, we didn’t know very well what to expect from this new SINISTER album after a nearly three-year hiatus, especially with a completely new line-up where only Aad is the only original member but not as the drummer anymore, just as the vocalist. So there’s not even one characteristic element of the band left. Anyway, after the great 2nd album of INFINITED HATE, there was some hope… Right after the first listening of “Afterburner”, the sensations were more than excellent!! Fuck, everyone could recognize it’s SINISTER in no time!! I don’t know how they did it!! Perhaps it helps that Alex Paul, former bass player and now guitarist, has perfectly captured the true essence of the SINISTER style. But the truly positive thing about this album is that they have known how to progress and offer new elements always respecting the band’s style, this is powerful, brutal and intense Death Metal in its purest form, with Aad singing with a grim and gutural voice, in the truest SINISTER tradition!! In various moments this album reminds me on the glorious “Hate” album, it has killer riffs and killer songs!! They include new rhythms and melodies that they didn’t do before, dark midtempo passages… Even the drummer has more variety than Aad and now you can hear very fast blast beats that were missing before. All in all, I think SINISTER have made a great step forward after various average albums (in my opinion), and that brought a touch of fresh air to their career. This is already one of my fave albums of the year so far… Pure Death Metal!!