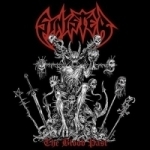 Netherlands’ SINISTER are getting a facelift via a reissue of the band’s early demo / compilation / split EP materials. Originally released in 2009 by Goregiastic Records, “The Blood Past” is a sick Death Metal fan’s dream of taking a look back at the roots of this powerhouse. When a label usually releases a band’s demo material it can be really hit or miss. We all know that 9/10 times the production will be subpar and even worse is when the recording is truly an ear drum’s worst enemy with overly poor production. Luckily this recording does not suffer much from that area and thankfully Hammerheart Records has seen a gem in this reissue (they even corrected the misprinted tracklist of the original and changed the booklet a little bit – Frank). I don’t know exactly how many copies were originally released by Goregiastic, but what I do know is that this album has been very hard to find and often at quite a price. The breakdown of this album is simple; you get 19 tracks that run at just over an hour. You get 2 songs from the “Where Is Your God Now….?” compilation from 1990, 3 jams from “Sinister” EP also from 1990, their “Perpetual Damnation” demo also from 1990, their half of the split 7 inch EP with MONASTERY from 1991, the “Sacramental Carnage” demo, and their one song from a 4 way split sample EP from 1992. Yes this is quite the collection and is a MUST for any SINISTER diehard fan. I can honestly say that I had lost track of SINISTER after they had some line-up issues in the mid 2000s and was lucky enough to pick up a copy of their boxset “Altered Since Birth” (If you have not heard of this band, then pick up the boxset, it is truly worth the cash). This time capsule of a collection really brings back the feel and sound of the early 90s Death Metal explosion. SINISTER may have had several line-up changes since those days, but they are still churning out albums like machines. The music is really in your face and brutal. These guys have a niche of their own and hats off to them for surviving in the scene after all these years. The release showcases how consistent they are style with their brand of Death Metal with their shredding guitars and jackhammer drumming. I believe this reissue will be released the first week of October, but either way… PICK THIS UP! For more info: www.facebook.com/pages/sinister-official/255145351172432, www.hammerheart.com