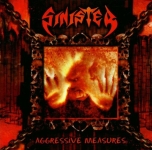 Back in 1998 I was a younger guy, turning 13 years old (I’m 30 years old now), on the verge of wanting to listen to more underground music as I was already sick and tired of the same old PUNGENT STENCH, MORBID ANGEL, SUFFOCATION, DEATH tapes and CDs I had at home (yeah, I had some friends playing in local Death Metal bands, thus I was listening to it all day). So I made a good friend working at a music store in the city I live in Mexico. I remember that day perfectly, I walked by the store during the last week of October, and my Clerk friend saw me walking by, and he yelled at me: "Hey man, we just got some new records in, we just got the new MERCENARY, BOLT THROWER and OPETH albums." So I walked in the store and while I was checking the stock he again said: "We just got the new SINISTER album." I remember I’ve heard of them by name but couldn’t get a hold on any record yet, so I asked my dad (remember I was 13? I was broke as hell) to lend me some money to buy that new SINISTER album as I wanted to check them out. To my surprise it was a cheap CD back when Nuclear Blast wasn’t trying to pinch your eyes out with 99 editions of the albums like they do now, so I was able to buy the BOLT THROWER CD too and went back home. When I opened the SINISTER CD I was eagerly waiting to listen to this band, as their 2 fantastic first records and the great record coming after them were kind of difficult to find here. The album starts with some noises as some sort of instrumental track (which is not instrumental at all, but an intro). When the title track kicks in you recognize the distortion used in this record, it’s late 90s distortion, like the ones IMMOLATION, SUFFOCATION, etc were using by that time, so it made me fill in a comfortable place while trying to catch up on what was going on with this band. The riffs are very catchy, with lots of tremolo picking and some low tempo palm mute sections to let the drums and bass to take in. The bass is very loud and distorted, sounding more like a rhythm guitar than a bass, but with some low vibe sections to let it have personality, drums are just what you should expect with a mix of blast beats and basic “tupa tupa” sections. As for the vocals, what really caught my attention was that it sounded like a mix of Frank Mullen and George Fisher (not bad, not average, just different). I really liked the red color used for the artwork and the photo shoot in what looks to be a melt fabric, so everything is fine and good for any Death Metal monger. Now years later I was able to buy SINISTER’s entire catalogue via Metal Mind (re-issues), all housed in digipaks with bottom gold CDs and numbered (limited to 2000 copies each). I’ve listened to their magnificent debut album raw, direct and uncompromised Dutch Death Metal prime line. "Diabolical Summoning" and "Hate" are also great records, with some memorable riffs and headbanging sections, and after listening to “Aggressive Measures” once again (15 years after I first bought it) I realized why some people didn’t like this album onwards SINISTER’s career, as it lacks the real “SINISTER vibe” they had in their early records. This is the album were the band moved to a “modern” sound while trying to retain their trademark song structures, but failed. I have some mixed feelings (obviously) about this record, as it was something that shocked me first and years later it was very meh. However I can’t deny that what this band created back in the 90s was some of the finest Death Metal all over the globe. The constant line-up changes killed everything for this band in my opinion as they couldn’t find a stable gang for more than 2 records in a row, proof of that is seeing now Add (founder) switched from drums to vocals as they couldn’t find anyone appropriate to handle the task. Give yourself a chance and listen to the record, be your own judge and see if you like it, hate it or love it. Go visit www.sinister-hailthebeast.com, www.facebook.com/pages/sinister-official/255145351172432, www.facebook.com/metalmindproductions