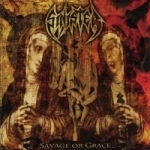 The Dutch premier Death Metal band SINISTER had its musical peaks with the crushing debut “Cross The Styx” (1992), the hit “Bastard Saints” (1996) and the excellent kind of a comeback album “Aggressive Measures” in 1998. But several vocalist-changes, which finally lead to OCCULT’s Rachel joining the band, have undoubtedly weakened the musical force SINISTER once represented. Although the riffs still kill, the drums still furiously blast and the songwriting is as convincing as always the woman violating her larynx on “Creative Killings” (2001) and “Savage Or Grace” simply isn’t as good as the previous SINISTER-frontmen. At least I loved about Mike and Eric that they were brutal shouters but you could always understand what they were singing, now that’s my problem with Rachel. The lady is definitely brutal as hell but her growls lack of the clarity and intensity I enjoyed on SINISTER’s first five releases. To make a long story short: “Savage Or Grace” is a good Death Metal CD and with the titletrack, ‘Conception Of Sin’ and ‘Collapse Rewind’ it offers some really cool songs, but SINISTER albums used to be a little bit more in the past. Listen to a song like ‘Doomed’, ‘Into The Forgotten’ or ‘Awaiting The Absu’ and you will know instantly what I mean. For additional information and a sound clip surf to www.nuclearblast.de and find out for yourself if you can live with SINISTER 2003 or not!