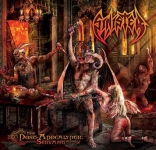 Not even two years after “The Carnage Ending” marked their 10th album, Dutch Death Metal institution SINISTER is back again with a new album. “The Post-Apocalyptic Servant” was recorded by the same line-up in the same studio (Soundlodge) with the same producer (Jörg Uken), the cover art was also done by Mike Hrubovcak… Nothing new in the house of SINISTER? Yes and no, I should say. This set-up already delivered a good album in 2012, and so “The Post-Apocalyptic Servant” was created by a team that operates well together. The result is that everybody knows the best side of the other people involved. That’s why “The Post-Apocalyptic Servant” sounds a little tighter than its predecessor, and therefore kicks asses a little harder. As far as the musical direction is concerned, SINISTER haven’t really changed. They’re still deeply rooted in the European way of playing Metal of Death. You can’t teach tricks to an old dog, I guess. However, the details have changed a little bit anyway. In comparison to “The Carnage Ending”, the new album is more pronounced on the technical skills, of course not at the expense of brutality. And the SLAYER vibes are more present here during the whole album. But the most interesting news about “The Post-Apocalyptic Servant” is the story that is told on the album, a fiction about the world after the apocalypse. Maybe it’s the lyrical concept that makes this album sound as if it’s made from one piece. And that’s its most significant strength. If you want some listening suggestions, check the rabid opener ‘The Science Of Prophecy’, the SLAYEResque ‘The End Of All That Conquers’ or the final massacre ‘The Burden Of Mayhem’. As I talked about the things that haven’t changed in the house of SINISTER: this album is again outfitted with a limited edition digipak bonus CD on which we have three cover tunes once again. Well executed versions of classics by MORBID ANGEL (‘Fall From Grace’) and PARADISE LOST (‘Deadly Inner Sense’) are accompanied by an experiment that surprisingly did not fail. SINISTER made the best they could out of ‘Unstoppable Force’, originally by Speed Metal gods AGENT STEEL, with Aad thankfully not trying to copy John Cyriis. Additionally we find a professional video clip for the album opener ‘The Science Of Prophecy’, with the band performing in a post-apocalyptic setting. Look for more at: www.sinister-hailthebeast.com, www.facebook.com/pages/sinister-official/255145351172432 or the label site www.massacre-records.com