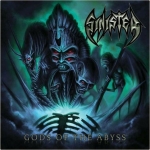 A band that doesn’t need any introduction or bio info whatsoever are citymates SINISTER from the Netherlands. "Hate" and especially "Cross The Styx" are classics today and with this year’s "Syncretism" (2017) the band proves its power is far from lacking after a quarter of a century. A lot of you will be familiar with the four featured tracks ‘The Grey Massacre’, ‘Afterburner’, ‘Altruistic Suicide’ and ‘Men Down’, since they appeared on the "Afterburner" album (in newly recorded versions – Frank). The story behind these tracks, on the other hand, is interesting enough. After a few weaker albums since "Hate" (1995), it was "Savage Or Grace" (2003) that lead to an end in contract with Nuclear Blast. Drummer Aad Kloosterwaard handed over his sticks to Paul Beltman and together with bassplayer Alex Paul they formed NO FACE SLAVE. During 2004 and 2005 they recorded these four tracks and eventually encluded these to the SINISTER catalogue, which eventually resulted in a new contract with Nuclear Blast. "Afterburner" followed soon after and this seventh album showed the band in a very strong form again. At first sight, not that much seem to have changed, because you’ll still get the thrashy riffing and the fast drumming that give SINISTER their natural agression and brutality. The band has never released a bad album, so there’s really not much to complain. Still, "Gods Of The Abyss" makes the difference and sounds fresher and powerful. Big part is thanks to the very dynamic yet relentless drumming that goes hand in hand with the riffing. Just listen how the new drummer punishes the cymbals on ‘Altruistic Suicide’. This one and ‘Afterburner’ have a real classic atmosphere reminded of SEXTRASH on "Sexual Carnage" for example. Aad is very convincing as a vocalist and does a great job. Usually an end leads to a new beginning and SINISTER proves to be a band with estamnia and will to keep on trying to get the most out of themselves. It went from strong to stronger and the sound on "Gods Of The Abyss" is being developed and perfected ever since. Originally recorded in 2004 / 2005, it got remastered in 2017 and the sound is heavier than before. For more info, go to www.facebook.com/sinisterofficial, www.vicrecords.com