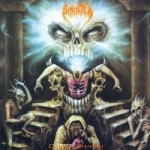 Once again, thanks are in order to whatever trend-force or fan-coercion prompted Metal Mind to obtain the rights to re-press the early SINISTER discography – and with bonus tracks no less. The “Diabolical Summoning” album, the sophomore effort, is an even better produced, and more sophisticated “Cross The Styx”. Things would only get better from here, culminating in the masterful third album, “Hate”, in 1995. If one chooses to look at the first three SINISTER albums as a series of steps towards perfection, then “Diabolical Summoning” will disrupt that chain of succession, because in many respects, it is a better album than “Hate”. It is the most abrupt, in-your-face SINISTER album at least as far as their early work is concerned. Yet, it retains a considerable amount of subtlety and devilishly intricate, and menacing guitar work to remain, pardon the pun, sinister. Songs such as ‘Sadistic Intent’, and ‘Leviathan’ speak for themselves. The fact of the matter is, “Diabolical Summoning” is an incontestably good record, but it also represents a turning point for the band. From this album forward, things will only get more technical. Irrespective of how good the band is, that shift did guarantee that some fans would hop off afterwards. Nevertheless, as Death Metal albums go, this is a bonafide classic. Just like the “Cross The Styx” re-release also this one comes as a limited, numbered digipak edition (again in 2000 copies) and features the additional live tracks ‘Into The Forgotten’ and ‘Bleeding Towards The Wendigo’. www.sinister-hailthebeast.com, www.myspace.com/sinisterwingsofdeath