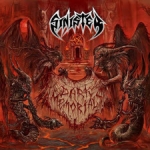 SINISTER – a name like a monolith. Every Death Metal fan knows this band from the Netherlands, because they are active for 25 years by now and always released great music, never leaving the path of Death Metal. On the occasion of the silver jubilee the band released "Dark Memorials", an album devoted to the band’s main influences and most adored bands. Taking a look at the bands getting covered – SEPULTURA, CARCASS, BOLT THROWER, MERAUDER, DEATH, KREATOR, AUTOPSY, SLAYER, REPULSION and CARNAGE – I must admit that all those band (except MERAUDER) are amongst my personal favorites and therefore this album is pure enjoyment, at least for me. But even leaving preferences aside SINISTER did a great job, for two reasons. First there is the clear and powerful sound, which is making you turning up the volume again and again, until you end up with burning speakers. Really impressive. Sadly this sound does not work for the twisted and sick atmosphere of the CARCASS song ‘Exhume To Consume’, but that is the only fail on "Dark Memorials". The second reason for giving thumbs up is the fact that SINISTER managed to make every song sound more aggressive, more crushing, more grinding, more powerful. It is like having a photo in black and white in memory and then taking a look at the same picture, but in color. Which does not mean the original versions were weak or lo-fi, but everything is just a slice more intense. Some people have the impression the original atmosphere of each song is getting lost, but in my humble opinion that is not really negative. You will get excellent produced Death Metal versions of all-time classics, only the CARCASS track is loosing its special aura. Accordingly to the cover songs SINISTER re-recorded their own classic tunes ‘Spiritual Immolation’ and ‘Compulsory Resignation’, both taken from the debut “Cross The Styx”. And what worked pretty good for the other songs is this time again pure enjoyment. As a bonus the second disc of this anniversary release is a DVD called "Australian Darkness", a document of the Australian tour 2014 feat. interviews, live and on the road stuff. More info at: www.sinister-hailthebeast.com, www.facebook.com/pages/sinister-official/255145351172432, www.massacre-records.com