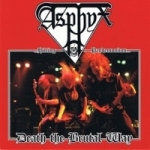 What can one say about mighty ASPHYX that hasn’t been said already? This band is like the epitome of crushing, slow, ancient Death Metal. "Reviewing" anything by this godly act is useless because everything that they ever produced is over the top quality material and personally I worship even their "God Cries" album. If you don’t already own their entire discography then you are missing some of the best Death Metal jewels ever produced by a band from the European Death Metal scene. I guess everybody knows by now that ASPHYX have reformed in order to perform a couple of live shows and there are even chances that these Dutch masters will come up with a brand new full-length album! In the mean time the band has "conspired" with none other than Costa Stoios (of Iron Pegasus fame) to release a killer 7inch entitled "Death… The Brutal Way" which contains a brand new composition and a fresh cover song. The brand new, self-titled track (‘Death… The Brutal Way’) is a fast paced song with some – characteristic – slow, doomy parts. This is a megaton of straight-to-the-point brutality that proves that ASPHYX are still able to write some killer tunes! After listening to this I am growing impatient for a brand new, full-length album. On the B-side we have a CELTIC FROST cover of ‘Os Abysmi Vel Daath’ (from their "Monotheist" album) which turned out really cool and performed in the distinctive ASPHYX style (or to quote Costa, it has been "ASPHYX-iated"). I think that this will also be part of a Century Media compilation where each Century Media band will cover another one from the label’s roster. I guess at first it seems like a "weird" choice considering the musical differences between the ASPHYX material and the avantgarde approach of the "Monotheist" album but I guess everybody in ASPHYX worships CELTIC FROST… but who we are kidding, I am sure Wannes is totally responsible for that. I mean this guy is the absolute CELTIC FROST worshipper. The 7inch is also visually impressive. Hosted in a thick lyric sheet and a glossy, cool-looking red sleeve, the 7inch looks killer (with the first 100 copies on splatter red / black vinyl). This will soon be one sought after gem and trust me, if you are seriously into ASPHYX, or real Death Metal in general, you don’t want to miss this! www.iron-pegasus.de 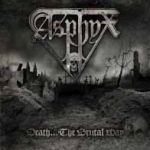 "Death… The Brutal Way" is the first album from Dutch Death Metal stalwarts ASPHYX since their 2000 reunion. As with all first albums, fans will be asking themselves, "Should they have stayed disbanded?", "Can they still cut it?", etc but fear not; this album marks a furious return to form for ASPHYX… it’s a comeback… the brutal way! Most of the songs, though played at a mid tempo chug, will have heads banging all around and guitarist Paul Baayens shows that he’s got quite an arsenal of riffs up his sleeve, as heard on ‘Cape Horn’, ‘Scorbutics’ and the title track ‘Death… The Brutal Way’. Many of the songs also are excellent at creating a very bleak, doom-ish atmosphere, as ‘Asphyx 2… They Died As They Lived’ proves. The title track is, in my opinion, the stand out track on the album, showing how capable ASPHYX are at switching from machine gun tremolo picked riffs to chuggy, instant headbangers, much in the same vein as GRAVE. Martin van Drunen’s vocals are quite similar to John Tardy’s of OBITUARY, almost entirely intelligible and sounding like a person regurgitating, and may not be to everyone’s taste, however, I found they do grow on you as the album progresses. There’s also a limited edition of the album with a special slip case cover and a bonus DVD featuring the band’s brilliant reunion gig at 2007 Party.San festival in Bad Berka, Germany. Overall, while nothing mind blowingly original is on display here this is a quality release from a band who are back to cement their place in the hearts of Death Metal and are out to do so in a brutal way. Definitely worth a listen. For more on ASPHYX check out www.myspace.com/officialasphyx or www.centurymedia.com