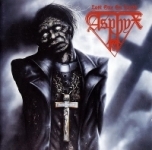 The color of the logo was changed from red to white and the quality of the artwork turned out a bit worse. The album’s title is no longer on top of the logo, but is now centered at the bottom of the front-cover. The whole layout was inked into a dark blue, the lyrics are included, but the backcover pic and thanxlist is missing. The frontcover artwork of the “Crush The Centotaph” EP ended up on the booklet’s backside, but turned into blue as well and not in its entirety. Bonus material: the 5 tracks off the “Crush The Cenotaph” EP as well as 3 songs off a self-titled ASPHYX promo demo that got them the deal with Century Media.