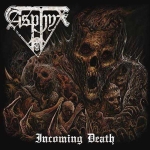 What do you expect from a new ASPHYX album? I’m pretty sure none of you expected anything else than pure fucking doom laden Death Metal. Hell yeah, you’re god damned right. On their ninth full-length album ASPHYX is still ASPHYX and that is highly appreciated from my side. And although there are some “modern” and epic riffs and moments (and a piano in ‘Subterra Incognita’), which I never expected to find on an ASPHYX release, “Incoming Death” is a fine, traditional, powerful and brutal Death Metal album. The opening track ‘Candiru’ (a short ‘quick & dirty’ straight forward tune) proves that instantly. The compositions on this new opus represent the full range ASPHYX always delivered, which means you will find the well-known mixture of furious neckbreaking Death Metal songs and great, colossal Doom hymns which can be found on all previous releases. Mr. Van Drunen still sounds like he’s gurgling with hydrochloric acid and he still has the power and the malicious filthiness he always had. The odd thing with ASPHYX is that none of the founding members are in the band anymore but the current line-up definitely knows how this war machine has to sound and how to kick serious ass with the same attitude and energy. By the way, DESASTER’s Tormentor makes his debut on the ASPHYX drum throne and he really convinced with a thunderous performance. To sum it up, “Incoming Death” has some few new influences but still is a typical and traditional ASPHYX high quality product which should please all ASPHYX fans out there (die hard fans of the band should definitely pick up a copy of the medibook edition of the album as it features two additional bonus tracks from WINTER and MASTER and a live DVD with professionally filmed ASPHYX shows from the band’s Brutal Assault and Hellfest performances as well as the promotional video for ‘Deathhammer’ – Frank). All further info at: www.asphyx.nl, www.facebook.com/officialasphyx, www.centurymedia.com