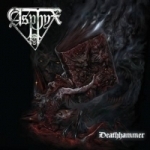 I always loved ASPHYX but I was kinda pissed when I read in several interviews that Martin was talking shit about their former bass player (and vocalist) Wannes Gubbels. That’s a useless and childish behavior, especially because Wannes helped to keep ASPHYX alive when Martin wasn’t in the mood for Death Metal… Anyway, let’s talk about more positive stuff… ASPHYX released a new album which is definitely one of the highlights in the band’s career and also one of their most brutal releases ever. “Deathhammer” is a very suitable description of what this Dutch Death Metal legend delivers these days: nothing but crushing Death Metal the way it was meant to be!!! This is already the eighth full-length (plus the SOULBURN album) and it is one of their best efforts so far. Sure, there is nothing new, nothing innovative and nothing you haven’t heard on any other ASPHYX album before BUT that’s exactly what we want, what we need and what we expect from those Dutch veterans. Although I’m very enthusiastic I have to say that there are one or two songs which are not that good… the title track, for example, is nothing but boring. It’s a typical ASPHYX crusher but it’s booooring as hell. But on the other hand songs such as ‘Minefield’, ‘The Flood’, ‘We Doom You To Death’, ‘Vespa Crabro’ and ‘As The Magma Rises’ are incredible awesome compositions which would be amongst the best songs on EVERY album the band released so far. Martin’s voice is fantastic as usual and the production is massive! Damned, “Deathhammer” sounds really great and devastating. This is definitely a must have album!!! The bonus disc of the limited special digibook edition contains ‘Der Landser’ with German lyrics (taken from the “Reign Of The Brute” 7”) plus the rare songs from the “Death The Brutal Way” 7”, the split 7” with HOODED MENACE and the split 7” with THANATOS. Well, that’s what I call a very fine compilation. If you buy this limited edition you’ll also get a download code for two live tracks. Which are honestly spoken not that exciting… but hey, they are for free ; -) Okay, let’s sum it up: those old farts are still able to show the new generation how Death Metal has to sound. They are still able to kick our asses and they still don’t take prisoners… So let the “Deathhammer” crush you all!!! (* the total playing time is based on the regular album, the bonus disc and the digital downloads – Frank). All further info at one of these sites: www.asphyx.nl, www.facebook.com/officialasphyx, www.myspace.com/officialasphyx, www.centurymedia.com