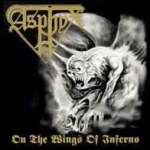 ASPHYX
On The Wings Of Inferno
(Century Media Records)
73:29min

I must be honest. After Van Drunen left ASPHYX I totally lost interest in the band. It seems I was not the only one, as some of the albums recorded without him were not exactly up to the quality of the material released before. Even in the “God Cries” album I have heard more than once that they sounded like a Deathcore band… Ok, Deathcore in the best sense of the word, nothing to relate to what now that word means. Then, this album came out 4 years later. And it seems it was all done to save the band. And Wannes Gubbels, the man from PENTACLE, seemed that he was on a journey to rescue this name of total death from disgrace. First of all, the crushing guitar sound of early ASPHYX albums is recaptured here. Second, the voice of Wannes is doing his best to sound like Martin Van Drunen, but on his own style, and I must add he does it in a great way. And third, the compositions are back to what the band does best: simple and direct Death Metal. This album is definitely a way to make redemption and ask forgiveness to the Death followers for what it seemed like and inevitable end. There might be a few touches that make the band sound more modern, and I think it is all because of the production, but in fact it does add more power to the band instead of taking it away. Whereas some of the more mid-tempo songs of previous efforts where Theo Loomans (RIP) was playing were quite boring to be frank, in this record they have a better effect as they become more dynamic, and of course heavier and deadlier. This new edition gives us the chance to rediscover a truly great jewel, that unfortunately due to probably bad promotion and the heritage of the weaker previous albums, passed by for many followers of the truly grotesque Death Metal. It has a different cover art, whereas in the original it was a black, white and yellow image of a demon thing (similar to the one found in the cover of SOULBURN another ASPHYX related project) this new one is totally different, with a black, red and white cover with a dragon thing devouring a women… well, none of the covers are that good… it contains a bonus CD that besides one song that originally appeared in the compilation “In The Eyes Of Death” with Van Drunen on vocals, also features a full live show from 2000 (with Wannes on vocals and bass) with a quite raw sound, like it was recorded with a normal tape recorder, that although interesting it really does not adds any value, and that could be left aside. The album as it was originally done at only 30 minutes it is worth for it alone. Now that the band has resurfaced stronger than ever with Van Drunen AND Wannes, and released a great album with “Death… The Brutal Way” I recommend that you seek and get this one as it really deserves to be up there along “The Rack” and “Last One On Earth” as this is a killer Death Metal record, that on its time it was haunted by dark ghosts of misery but that now shine with furious power. www.asphyx.nl, www.myspace.com/officialasphyx, www.centurymedia.com