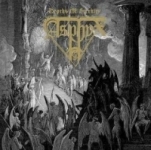 Come 2009 and ASPHYX had reemerged to assert their rightful position in the pantheon of crushing Death / Doom. This is a great thing for all die-hard, head-banging, fist-pounding ASPHYX maniacs. To commemorate and honor the triumphant return, their label Century Media presents "Depths Of Eternity" – a re-release compilation of ASPHYX’s self-titled 1994 full-length and 1996’s "God Cries". Both albums are re-mastered. It also includes two live tracks from the Netherlands (1994) and two demo recordings from 1995 sessions. As you may already know, the 1994 opus benefits from a solid production and features some massive, sprawling riffs that build into intriguing conceptual / mood-setting keyboard-adorned pieces. There are some amazing feats of electric-guitar sustain on this record, with glacial riffs and shimmering leads reaching out through the cavernous ages. There are a few excellent, pure-ASPHYX churners as well. But I have always felt a significant downside to this record is the vocals by Ron Van Pol. They’re overblown at times and just nowhere near as awesome as Van Drunen. So, what about the problem some seem to have with the "God Cries" album? First of all, I’ll point out it represents only a relatively minor departure from the monolithic style that must always be the heart of ASPHYX. The divergence of style successfully accommodates brutal, pummeling hardcore (which is not necessarily out of place considering the influences at the origin of this kind of Death Metal), but unfortunately, also given allowance are a few rays of sunshine where there can only be darkness – folly! Vocalist Theo Loomans’s throat-straining delivery is agreeably hoarse and vein-popping, harkening to the lacerating cords of Martin Van Drunen. Overall, it’s a bit different, and far from peak ASPHYX considering the indisputable weak spots, but "God Cries" is nevertheless rocking and doubtless back-breaking heavy. www.asphyx.nl, www.myspace.com/officialasphyx, www.centurymedia.com