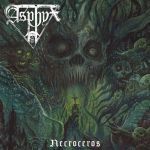 Even though a new album from the mighty ASPHYX should be (and in fact was) a sure-fire success, I will tell you something more about “Necroceros”. Not only because I really love everything they did after the restart in 2007, but also because “Necroceros” is the best album they did since then, in my humble opinion. Perfectly put on tape (or vinyl, or disc, as you please), this album really shows all the facets of the band in a way that impressed me. The album starts off with ‘The Sole Cure Is Death’, the fast opener every newer ASPHYX album starts with. Yet this one has a break that already hints on the general heaviness of the album and ends with Martin shouting: “Release the bloodhounds!”- I don’t know why I had to think of Monty Burns from The Simpsons in this moment. With ‘Molten Black Earth’ we find a song that might have been from a HAIL OF BULLETS album, as the lyrics deal with Martin van Drunens favourite topic of war. But also musically this one fits the disbanded history tellers well with its mid tempo grooves. After these two already great songs, we have the first ubersong with ‘Mount Skull’, a monolithic and morbid Doom Death song, that could serve as a blueprint for the kind of songs that make the style of ASPHYX so special. Ultra-heavy, thick like a lava stream and with a creepy atmosphere, yet with an all of a sudden full speed break that bursts the slowness. The heavily grooving mid tempo smasher ‘Knights Templar Stand’ even has a certain hit potential (in terms of Death Metal) and leads the path to another outstanding masterpiece of doomy hooks. ‘Three Years Of Famine’ comes along so damn heavy and slow, but complex and full of surprises. I just love the sparing, yet effective guitar harmonies and the acoustic break, and the the groove towards the end is just amazing. The albums B-side opens up with the extremely harsh ‘Botox Implosion’ that just hits straight in the face, a kick in the teeth that’s refined with a merciless groove part and that will surely break some necks. The manic ‘In Blazing Oceans’ is a trip through the abysses with atmosphere and a heavy beat of the most exquisite kind. With ‘The Nameless Elite’, we have another song for those who still miss HAIL OF BULLETS, as it features those special grooves and vibes. Close to the end, there’s ‘Yield Or Die’, a fine smasher that will surely bang some heads. But all these fine songs are more or less the overture to the title track. And ‘Necroceros’ is not just the highlight of the album but the finest song ASPHYX recorded after their resurrection. This slow grinding monster is full of twists and creeping turns, a haunting nightmare of a song. Titanic, monolithic and creeping – a masterpiece of its own! So, before I rave about this album to you even more, I can only advise you to check out “Necroceros” if you haven’t done yet. You won’t be disappointed if you are into great extreme music. Just in case: www.facebook.com/officialasphyx, www.asphyx.nl or www.centurymedia.com