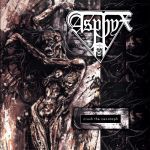 I think it’s futile to introduce ASPHYX to these pages, as the Dutch Death / Doom legends should be known to everyone here, basic knowledge, you know… So let’s take a trip back to the past of the band. The year 1991 saw the release of the fabulous ASPHYX debut album “The Rack”, which now, nearly three decades later, is among the iconic Death Metal album of the old school. It was the time of the “classic” (not the original) line-up of ASPHYX, with Martin van Drunen also handling bass duties, Bob Bagchus on drums and Eric Daniels on guitar. It was the same three people that released an EP with three (more or less) new songs and two live recordings a year later, as a kind of appetizer to the upcoming second album “Last One On Earth”. This effort was called “Crush The Cenotaph”, just like the third demo of the band from 1989, and sometimes gets lost in between these two classic albums. And now there is a good chance to (re-)discover these fine songs, as Vic Records re-released the EP on CD again, just like it was back in 1992. The first two tracks of “Crush The Cenotaph” were new versions of songs from the aforementioned demo tape. These two songs, the creepy and killing title track with its breaks like barbed wire and the sinister ‘Rite Of Shades’ were and still are finest food for those who loved “The Rack”. They fitted the doomy Death Metal style of early ASPHYX perfectly and could have easily been included on “The Rack”. In addition, we had a completely new song called ‘The Krusher’, which was re-recorded for “Last One On Earth” later that year. This one is a real Death Metal juggernaut, slowly creeping and steam rolling over the listener, with just few faster outbreaks. As for the two live tracks, these were songs from the debut, ‘Evocation’ and the classic skull smasher ‘Wasteland Of Terror’. Recorded in 1991 in Stockholm, both are presented here in raw and brutal versions, with a pretty good live sound. And these two live tracks lead me to the decisive flaw of this re-release: the missing extras! (well, at least the Vic Records edition comes with a real booklet this time, featuring all lyrics, a couple of pics and liner notes! – Frank) As I’m pretty sure that the whole ASPHYX show in Stockholm was recorded, it might not have been a big problem to add some more tracks from that show or even the whole gig as an extra to this re-release, to make it a worthy new edition. Especially as this EP already was included in the last editions of “Last One On Earth”. So, if you’re interested in this release, visit www.facebook.com/officialasphyx or www.vicrecords.com