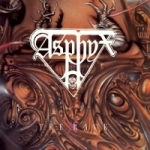 The logo is a bit smaller now and was moved from top middle to top right, while a different section of the full artwork was used for the frontcover (unfortunately too blurry and dark). The foldout booklet lacks the thanx list of the original release, but features all the lyrics, various color shots (live- and promopics) and a big bandpicture on the flipside. Bonus material: 11 ASPHYX live tracks that got recorded in Holland, 1991. 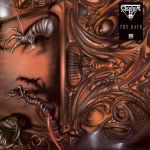 Considering Voices From The Dark Side as a portal for true fans of Heavy Metal, I don’t want to introduce ASPHYX as they are a band to discover (you’re really miserable if you’ve never heard about them). Anyway, here we have a new reissue of their cult debut full-length "The Rack", re-released again as a double CD / LP to celebrate their 30th anniversary. The raw analog production, Eric Daniels’ super distorted guitar sound, Martin van Drunen’s raspy, whiny voice and Bob Bagchus’ minimal drums arrangements are trademarks of this classic album, as the gloomy slow riffs are the backbone of the ASPHYX songwriting. Even if their total masterpiece is, in my opinion, their following "Last One On Earth" album, "The Rack" is surely on the top debut Death Metal releases ever. This reissue is not fundamental if you already own the album, especially if you own the 2015 remastered reissue. However, die hard fans may be interested in the extensive liner notes by ASPHYX members and a previously unfinished original artwork. Moreover, the bonus disc contains the whole tracklist with covers played by various bands, so while the contemporaries Swedish DAN SWANÖ, GRAVE and ENTRAILS made great versions of ‘The Quest Of Absurdity’, ‘Vermin’ and ‘Pages In Blood’, DESASTER, COFFINS, DESERTED FEAR (their bombastic production maybe doesn’t fit well with the ASPHYX sound) and PURGATORY made good but not exciting versions of ‘Diabolical Existence’, ‘Wasteland Of Terror’, ‘The Sickening Dwell’ and ‘The Rack’. I really like the instrumental ‘Ode To Nameless Grave’ by HOODED MENACE, which is even slower than the original one, but I think that the winners are SKELETAL REMAINS with an awesome version of ‘Evocation’, above all for the great interpretation of Chris Monroy on vocals. More info at: www.facebook.com/officialasphyx, www.centurymedia.com