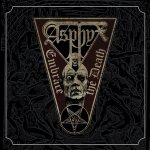 ASPHYX. The cult around this band is remarkable. Being disbanded two times, changed name and not to mention having several line-up changes, but… All falls back on its place like it did twenty years ago, sticking to their guns and as always with much class. The spell just can’t be broken. “Embrace The Death” was recorded in 1990 and supposed to be the first full-length. Well, things changed and in 1996 it was finally released by Century Media featuring the “Mutilating Process” EP. After the haunting intro, taken from the “Children of the Corn” movie (DIABOLICAL MASQUERADE used this melody for the opening riff in ‘This Ghoultimate Omen’), ‘Embrace The Death’ – which was transformed to ‘Pages In Blood’ on “The Rack” – takes you to a desolate and dark territory supported by the echoing production. (Late) Theo’s grunts are a perfect example of the in-your-face-brutality this album delivers. Nothing forced or fake, just pure brutality. Like it’s testing how much you can take. Musicwise it’s direct, dark and doomy, with occasional speeding (midtempo). ASPHYX maintaned this style in their entire discography and many songs from this album got re-recorded which emphasizes the essence of this release. This 2009 edition offers a two disc version with (in my opinion) cool and suitable artwork. Disc one covers the original “Embrace The Death” album. Unfortunately, I can’t tell you if it’s remastered (yep it was! – Frank). Disc two is a real treat and justifies a double purchase. It offers the “Mutilating Process” 7″, the “Enter The Domain” demo and the killer “Crush The Cenotaph” demo! On top of that you get 4 rehearsal tracks (1989-1990) including a VENOM cover and a rough mix version of the “Mutilating Process” EP. So a total of 16 extra tracks (14 comparing to the 1996 edition). Personally I enjoyed the second disc more. Not that the “Embrace The Death” album is less, but the overall brutality works better soundwise on these fossils. Especially the “Enter The Domain” demo is a pure Death manifestation and sounds more like a live take. If you ask me, the perfect condition for such simple and vicious music to be utter effective. Listening to the pre album material gives me an idea how disappointed the fans must have been that “Embrace The Death” was postponed for so long. This reissue is the best way to make things up and I personally prefer to listen to the discs in reversed order to get fully asphyxiated! On Amazon the unused 1996 edition sells for over $190,- (!) so which one do you prefer? Get this! For more info, check www.asphyx.nl, www.myspace.com/officialasphyx, www.centurymedia.com