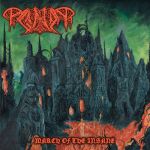 Sweden’s PAGANIZER have been around a loooong time. Long enough where they really need no introduction. And long enough to where we all know that they never disappoint. With their established Death Metal sound, they’ve managed to consistently throw brutality at us since their first demo in 1998. Now, 24 years later, PAGANIZER have released a nice little EP entitled “March Of The Insane” which contains two brand new tracks and three tracks from their split with HUMILIATION from 2014. The first new track, ‘March Of The Insane’ jumps right in abruptly with a massively heavy, rapid song that pulverizes as it barrels onward, mutilating everything in its path. The band hasn’t lost an ounce of crushing riffs in their decades as a band. ‘Festering Dreams’ is their other new one which pretty much continues with the high-octane drums / guitars. Rogga Johansson is his usual gurgling-vocalled self. Then from the split, ‘Global Manslaughter’ is a rawer, more primitive sound, yet still clearly what we all love to hear from this band. ‘Viking Hammer’ has some slightly off-kilter drums, but who really cares? It’s still a glorious piece of work with animosity that would scare even a bloodthirsty troll. The final track ‘Blood On The Axe’ ends with the sheer intensity of a bloody pillaging. Even if you already own the split with HUMILIATION, “March Of The Insane” is definitely worth the effort to obtain it. I can’t honestly see a point in life where PAGANIZER would ever let us down. For more band information, check out www.facebook.com/paganizersweden, www.facebook.com/ibdc666