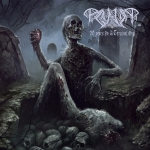 It’s twenty years ago now that an 18-year old guy from Gamleby in Sweden named Roger along with some friends started a band called TERMINAL GRIP. This band lasted for three years, released two demos before splitting up. Immediately after that, they started again under a new name with the two guitar players Andreas and the aforementioned guy called Roger, accompanied by Jocke on bass and Jocke on drums. Twenty years later, Roger is only known as Rogga, the band that was baptized PAGANIZER is still active and it’s time to celebrate this anniversary with a proper compilation. This one is called “20 Years In A Terminal Grip” and features two CDs full of Metal of Death, the Swedish way. The first disc features “The Band´s Faves”, a collection of 19 tracks from nearly any album the band recorded, only the first album “Deadbanger” was not taken into account here. Maybe this was due to the album not really representing what PAGANIZER became after this album, that was more rooted in Black Thrash Metal and suffered of a really poor production as well. Nevertheless this is a fine chance to get an overview on the massive output of PAGANIZER, especially for those who are not familiar with this band. Older smash hits like ‘Even In Hell’, ‘Life Slips Away’, ‘Bleed Unto Me’ or the cool ‘Meateater’ along with new tunes, including the crushing ‘Scandinavian Warmachine’, ‘Colder’ (AMON AMARTH, eat your heart out!) or ‘You Call It Deviance’ – this is 75 minutes of purest Swedish Death Metal! But a good anniversary compilation will not be complete without some stuff for long-time fans of PAGANIZER. They should be rather pleased with the second disc, subtitled “Rarities, Demos & Unreleased Stuff”. Here we find no less than 27(!!!) songs, most of them originally on EPs and split releases. Among others, we find the complete (I guess) ”Born To Be Buried Alive” recording session from 2007 that was featured on the EP of the same title and some other releases as well. And all the songs from the splits with DEPRESSION, ERODED and HUMILIATION, both tracks from the “Ode To The Horde” EP… It’s a bunch of rarities for all you gem hunters out there. But wait… There’s some stuff exclusive to this release for sure. The old days of the band, the days when PAGANIZER weren’t even known as PAGANIZER aren’t forgotten. With ‘Natures Bleeding’ and ‘Religious Cancer’ we find two re-recorded old TERMINAL GRIP songs from their demos, which sound very cool in a new and (not too) modern sound. And the unpolished recording of ‘Flesh Nest’ never saw the dark of day before, so even those very familiar with PAGANIZER will find something new here, as well as the chance to save their rarities. So, you still need arguments? Well, it’s no less than two and a half hours of music, a total of 46 songs on two discs, accompanied by a booklet that’s full of liner notes and rare photos, and another fine cover artwork from Daniel “Devilish” Johnsson. And this double disc will be sold for a special price! So, that’s value for fuckin’ money! Check the band at: www.facebook.com/paganizersweden, and the label at: www.cyclone-empire.com