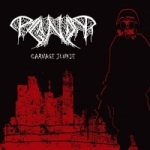 Swedish Death Metal musicians are in general nice and friendly people but if the management of Vic Records is again distributing promotion CDs with a wrong band name on the cover and furthermore an incomplete playlist they should avoid dark streets during their next Swedish holidays. The limited first edition of PAGANIZER’s sixth release is offering 17 pure Swedish Death Metal missiles with a fantastic sound (especially the guitars) which would be a reason for half the Swedish scene to slaughter Baby Jesus (if NECROPHOBIC still haven’t fullfilled their promise). The “Carnage Junkie” sound is like the second coming of HYPOCRISY’s “Osculum Obscenum” and for all real maniacs this should be at least one reason to buy this album. The release is on one hand value for money for sure but the long playing time is increasing the similarity of the presented songs. The real ear catchers are missing and it’s quite hard to differ between the songs due to the fact that the band is avoiding any counterpoints for example by inserting a solo or some kind of effects. PAGANIZER are following the old DISMEMBER steps and on this release you can find no bad song for sure, but if I compare it with other current Death Metal releases (especially from their local competition, meaning Sweden) “Carnage Junkie” is nothing more than a solid / average release. www.vicrecords.com, www.paganizer.com