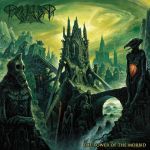 PAGANIZER
The Tower Of The Morbid
(Transcending Obscurity)
38:24min

Swedish horde PAGANIZER strikes back with their full-length album number eleven!! Active for more than two decades now, the underground warriors from Gamleby around Rogga Johansson show up in a pretty tight shape here. Really astonishing as Rogga already released a bunch of albums this year, so my expectations were not too high. But the opening track ‘Flesh Tornado’ speaks for itself and shows the direction of the album. OSDM at its absolute finest. Clear, like always there is no real surprise to find, but you get what you pay for. And this time PAGANIZER really nailed it once again. Eleven tracks full of good old Death Metal, varying in speed and brutality and enriched by a mass of killer melodies. The mentioned opener ‘Flesh Tornado’ or the second track ‘Apocalypse Writings’ are real wrecking balls, punching the listeners face with their intense speed and fine riffing and tight brutal drumming. Rogga’s grunts are also really killing on this release and fit perfectly to the written tracks. I prefer their midtempo stuff like ‘Cannibal Remains’, ‘Redemptionless’ or the title track ‘The Tower Of The Morbid’. My personal faves are the grave digger ‘Apocalypse Writings’ with a mixture of screams and grunts and a damn good solo and the very melodic ‘They Came To Die’, which sounds like a homage to the mighty EDGE OF SANITY. Enriched by a very good cover artwork and a damn good and clear production this album is by far the best I heard from PAGANIZER so far and definitely one, which will bring them some more attention in the mass of OSDM releases in this ceasing year. For more info, please check the following sources: www.facebook.com/paganizersweden, www.facebook.com/transcendingobscurity