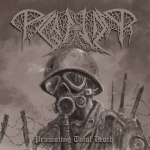 I am sure I have reviewed about a dozen of releases involving Rogga Johansson. This is a re-edition of the second PAGANIZER album, originally released way back in 2001, and re-released a few more times. This version includes two bonus tracks. And their sound has not changed a bit since they have started. They are a Swedish band that although takes influences from some bands of their area, it also has a lot more in common with American bands like MASSACRE or MALEVOLENT CREATION with some sounds in the BENEDICTION and BOLT THROWER area and of course with a big MASTER influence. Although there is not a weak song in here, as they are also very similar, this also does not have a standout song either. And that could be a good or bad thing, depending on your tastes. There are not tons of riffs here, it is more simple and direct and there are some fans that like it that way. As a matter of fact besides the production differences, songs from this album can go on any other PAGANIZER album and it will make almost no difference. They are the AC/DC of Death Metal and for some that is more than OK. Now, for me the band has done their best work in their EP from 2016 "As Sanity Dies" which incorporates some Black Metal touches (of all things for a band that has stayed loyal to their style), so they have definitely changed a little bit over the years. So, if you are a fan and don’t have this already, this is the chance to correct that now. More PAGANIZER info at: www.facebook.com/paganizersweden, label contact: www.vicrecords.com

Julián “All Hope Is Dead” Núñez

Julián "All Hope Is Dead" Núñez