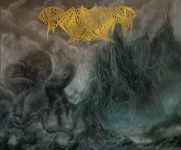 PAGANIZER
Where The Ancients Ones... Live
(Iron, Blood And Death Corporation)
56:58min

Due to the fucking pandemic in the world we all have to do without things we love. I guess I’m not the only one who misses going to a live show at least every once in a while. So I try to make up for the missing live gigs by watching concert DVDs. And I’m sure I’m not the only one. With this new and limited (500 copies only) live DVD from PAGANIZER, there is an alternative for those who need something new to watch or who haven’t seen the Swedish releasing machine on stage yet. “Where The Ancient Ones… Live” is not a recent recording, as the footage was filmed and recorded in 2006 in Valencia, Spain, when PAGANIZER were touring Spain and Portugal with the now defunct MACHETAZO. Of course this means that the show didn’t take place in a huge concert hall, but in a tiny club with a stage nearly at ground-level. And no one should expect a dozen of high definition-cameras who filmed the show from nearly any angle. Instead we have three cameras at most filming, one for the broad view and one or two in front of the stage for close-ups. The footage from these camera positions were cleverly mixed, with half speed black and white footage in between as the only effect. And there was no cuts in between the songs, so we can watch Rogga Johansson drinking beer and listen to his announcements, partly trying to talk Spanish. The result can be described as a professional bootleg video, which gives the watcher the impression to be part of the crowd at a show in a familiar setting. Of course it was nothing else. The raw, unpolished sound adds up to this atmosphere. The set list was a mix of songs from most PAGANIZER albums up to that day plus the back then unreleased “Carnage Junkie” album. This means we get cool songs and old band hits like ‘Just Here Rotting’, ‘Only Ashes Remain’, ‘Even In Hell’ or ‘Gasmask Obsession’. In other words: good old fashioned Death Metal done in PAGANIZER style, straight forward with no frills. That alone would have been fine enough, but there’s some obscure and rare stuff on “Where The Ancients Ones… Live” as well. For example we have a song called ‘El Diablo Cerveza’, a short Grind song PAGANIZER wrote especially as a tribute to their touring partners MACHETAZO. And members of said Spanish Grind masters enter the stage twice to support their tour mates. Their drummer and singer Dopi took over vocal duties for a cool, harsh and rude cover version of ‘Troops Of Doom’ from SEPULTURA. And after the final ‘Maggot Fodder’, which is a previously unreleased song, Rober of MACHETAZO did the vocals for a song called ‘Soy Una Puta Bestia’. So there are some real treasures on “Where The Ancients Ones… Live”, making the DVD a must-have for any PAGANIZER maniac. And lovers of good Death Metal and underground gigs with their unique atmosphere will have their fun with this entertaining, yet a little short DVD as well. Just don’t forget that this is kind of an “official bootleg”, as far as quality is concerned. And those of you who are not into digital music releases or who were too late to get a copy should know that there is a tape version of this show available as well, alternatively titled “Bombs Valencia”. But if you are interested in this DVD, you should check www.facebook.com/paganizersweden and www.facebook.com/ibdc666