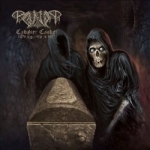 Well, I originally intended this review to be extremely short. The original version read like this: “It’s Rogga Johansson, so you know what is to do!” Well, even though these words might be enough for a lot of you, I decided to tell you more about this fairly new EP from Rogga’s first and still most release happy band. Originally, “Cadaver Casket (On a Gurney To Hell)” was available only for subscribers of Swedish Close Up magazine exclusively. The five songs presented the new line-up of PAGANIZER with the comebacker Matthias Fiebig on drums and former bass player Dennis Blomberg switching over to playing the lead guitar. And I’m pretty sure that the quality of the songs convinced anybody involved to release them again for all ears to hear. Cyclone Empire did a vinyl version earlier this year and now Vic Records put them out on CD as well, with both versions featuring ‘Deranged World’ as an extra song. Those who know PAGANIZER know what to expect: The old school of Swedish Death Metal, spiced with one or another hint on classic acts like MASSACRE. But always straightforward Metal without mercy, rotting, yet fresh. And on “Cadaver Casket (On A Gurney To Hell)” PAGANIZER sound as fresh as never before, presenting the essence of the band in a very fitting unpolished sound. Somehow I feel reminded of DEATH BREATH, since both bands are taking no prisoners and sing about anything that might be rotting. Well, talking about ‘Rot’, the song of that name is one of the highlights here, as well as the final ‘It Came From The Graveyard’. One of the coolest songtitles I heard this year! In addition, this EP is crowned by a cool horror movie inspired artwork by up-and-coming artist Daniel Devilish. So, those who love rather simple and straight Metal of Death in a cool package are welcome to check out “Cadaver Casket (On A Gurney To Hell)” at: www.facebook.com/paganizersweden, www.vicrecords.com