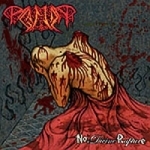 Sometimes it’s really a cool thing to receive new releases for free, especially if it’s of records that you otherwise certainly would never have checked out… In my case Swedish PAGANIZER is a perfect example for that. Even though the band already calls quite an impressive back-catalogue their own (“No Divine Rapture” being their 5th CD already!) I would never have felt the urge to listen to them. The stupid bandname, stupid logo and even more stupid cover-artwork (of the new album) not really made me curious… And the fact that their vocalist Rogga Johansson also can be heard on EDGE OF SANITY’s “Crimson II” album and the RIPSPREADER debut was another point of criticism from my side (c’mon, project work sucks big time, especially in times of such an overcrowded scene everyone should concentrate on one band only!). But it’s not always as bad as it seems and “No Divine Rapture” actually is a pretty cool record for all worshippers of old school SweDeath in the tradition of bands that were active in the early 90s (no need to mention any names here again…). Unoriginal as fuck, but very well performed and just like its predecessor professionally recorded at Soundlab Studio with NASUM producer Mizesko Talarzcyk and mastered by Dan Swanö. The band blasts and grooves through nine own compositions that are without a doubt of equal quality as those of most likeminded, more popular Death Metal heroes. The label’s slogan “Here you’ll find nothing but the most heavy and brutal old school Swedish Death Metal that fans of bands like GRAVE, VOMITORY, CREMATORY, ABRAMELIN, GOD MACABRE and the likes will devour without mercy!” summarizes the release in a very precise manner for a change. Cool one! More info at www.paganizer.com or www.xtreemmusic.com