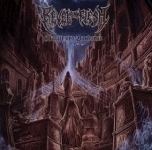 It wasn’t long for REVEL IN FLESH to return with a second album after last year’s masterpiece "Deathevokation". Which naturally means that they haven’t changed too much. Again Mr. Dan Swanö did the mixing and the mastering and again he did it very fine. Juanjo Castellano contributed to the album with another great piece of rotten Death Metal art, turning himself more and more into a modern-day Dan Seagrave. The core of the band still consists of Maggesson (drums and lead guitars) and Haubersson (vocals, bass and guitars), even though REVEL IN FLESH are a five-piece on stage with a permanent line-up. Musically they are still deeply rooted in the old school of mainly Swedish Death Metal, with their own special ingredient: True passion! And on this album, they also spiced their sound with a greater pinch of their own character. If you ever thought that the area of Swabia (in Germany known for economical house-building people) was as placid as the stereotype conveys, these guys will definitely prove you wrong. "Manifested Darkness" starts off furiously with the new band anthem ‘Revel In Flesh’, a fast and crunching sing-along, before ‘Dominate The Rotten’ satisfies everyone into stuff traversed by subtle breaks and fine songwriting. It’s time to get ready for the first definite highlight of "Manifested Darkness", a felt follow up for ‘Bonecrusher’ from their 7" with REVOLTING late last year. ‘Deathmarch’ slows down the speed and turns out to be a monstrous doomy anthem with fantastic melodic lead guitar work of Maggesson and a nearly epic atmosphere. The title track ‘Manifested Darkness’ starts with a DISMEMBERed introduction before turning into a lead guitar dominated fast crusher with great guitars and brilliant breaks. Holy shit, what a song! The best REVEL IN FLESH did up to now! Then ‘Torment In Fire’ slowly crawls into your brain, another break-laden crusher with some more down-tempo parts. The title ‘The Maggot Colony’ gives a hint on AUTOPSY, the song does so as well – imagine Chris Reifert working with Swedish musicians and this song might be the result. With ‘Operation Citadel’, REVEL IN FLESH calm the speed down once again and deliver stuff in a BOLT THROWER vein, including some fast parts and, again, great guitar leads. Even though ‘Warmaster’ hints on the aforementioned English Death Metal warmachine, the song itself is another speedy bolt out of the dark, that also doesn’t forget the variety of paces. And heed the vocal intro of the song! The last own composition ‘Rotting In The Void’ surprises with a dramatic piano introduction, before the song turns into a quite progressive monster that features everything I love about Death Metal: Brutal riffing, great harmonies, surprising breaks, doomy parts and a recurring theme. A damn fine last song. As a special bonus, REVEL IN FLESH again pay tribute to the old heroes of Death Metal. The CD version features a great version of AUTOPSYs classic smasher ‘Twisted Mass Of Burned Decay’ as song number ten, while the vinyl version will feature a cover of all-time classic ‘Mutilation’ of mighty DEATH. If you haven’t done yet, check out REVEL IN FLESH at: www.revelinflesh.jimdo.com or www.facebook.com/pages/revel-in-flesh/304228902958414. And be sure to visit the label site www.fda-records.com