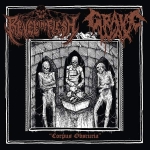 If there is one band that is definitely neither lazy nor unproductive, it’s Germany’s own REVEL IN FLESH. Right now, there will be three new split vinyl releases, all of them on 7" and the songs for the next album are nearly finished, according to the latest info from singer Haubersson. But before, we have to be satisfied with the appetizers. The first one is a split release with GRAVE WAX. REVEL IN FLESH present the unreleased ‘Corpus Vermis’, a song that fits perfectly to their discography. This means, we have finest, Swedish influenced Metal of Death, that doesn’t need to hide behind the originators of this music twenty years ago. Listen to the introducing riffs or leads, and no question will remain unanswered. This song would have been another smash hit on last years "Manifested Darkness" for sure. And according to the info from Doomentia, the song is a leftover from those sessions – hard to believe. On the other side of this 7" we find GRAVE WAX. For all those who don’t know about this band: it features well known cover artist Mark Riddick (also active in FETID ZOMBIE, among others), his brother Mike, who’s also an artist and musician (with MOONROOT), FETID ZOMBIE drummer Brian Forman and a guy called Kam Lee on vocals. Yes, it is the guy who was growling on the legendary "From Beyond" album by MASSACRE. The fact that they released only another split EP three years ago underlines the project character of this band. Musically, GRAVE WAX are very much based in simple early Death Metal of the late 1980s, yet they do what they do with a passion. ‘Obscuria Darkness Enraptured’ is a slower grooving song that reminds me of old MASTER with spooky breaks, while ‘Dis Organ Ized’ is a well done cover of a very old IMPETIGO tune. The more I listen to GRAVE WAX, the more I like their simplified approach. So, musically both thumbs go up for "Corpus Obscuria", and visually I give kudos as well, since the cover art was done by Mark Riddick, which is no surprise here. For more on REVEL IN FLESH, visit www.revelinflesh.jimdo.com or www.facebook.com/pages/revel-in-flesh/304228902958414. For all further GRAVE WAX info, check: www.facebook.com/pages/grave-wax/170223586384686. You should also visit the label: www.doomentia.com