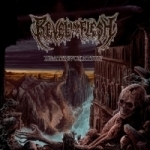 Well, old school Death Metal is alive and kicking. REVEL IN FLESH is nothing but a tribute to the heydays of Swedish Death Metal, so you shouldn’t expect any innovations or anything you’ve never heard before. But I’m sure that is fine for the majority of our readers. And it is fine for me, as long as it’s done with passion and the right attitude. The main man behind this project is Ralf Hauber (formerly of IMMORTAL RITES and editor of MYSTICAL MUSIC zine), so we can definitely be sure that it is done with passion and the right attitude. If you are still worshipping the early albums by ENTOMBED, DISMEMBER, CARNAGE, UTUMNO or GOD MACABRE and if your bible is called "Swedish Death Metal" by Daniel Ekeroth then you have to check out REVEL IN FLESH. "Deathevokation" contains ten crushing songs (spiced with some fine melodies) which are composed, performed and produced completely under the influence of classics such as "Left Hand Path" or "Like An Ever Flowing Stream". Although this is a good release with good songs and a good production I’m not completely persuaded. Don’t get me wrong, this is not bad but for a full-length album the song writing could be a bit more interesting and mature. I just think the band should have released one or two demos first. I’m sure four songs from "Deathevokation" as a demo release would have blown me away. So I’ll keep an eye on REVEL IN FLESH and have to say this album is a proper and solid release, nothing more – nothing less. By the way, Spanish artist Jujanjo Castellano delivered a brilliant cover artwork, which fits perfect to the music and the mood of "Deathevokation". http://revelinflesh.jimdo.com, www.fda-records.com