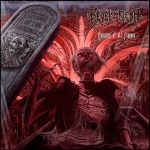 REVEL IN FLESH
Emissary Of All Plagues
(Cyclone Empire)
44:22min

During the last years, REVEL IN FLESH became regulars on our pages, due to three albums and no less than eight split 7”es with exclusive songs within the last not even five years. So, I spare the details and continue with the newest and fourth album of the Swabian Death machine. It’s called “Emissary Of All Plagues” and, I can already say that, it’s an album that sums up all the strengths of the band. Of course REVEL IN FLESH have neither re-invented Death Metal, nor changed themselves musically. I guess no one expects that anyway. Instead, they did the next step forward and refined their style. You’ll get a damn intense dose of lethal Death Metal that pays tribute to the original masters of Death Metal from a band that is far from being a copy cat. Thus, REVEL IN FLESH starts “Emissary Of All Plagues” with the title track, an opener that fulfills any expectation. It’s fast, melodic and with a short break to rest the neck muscles, but of course it takes no prisoners at all. For the following ‘Casket Ride’, it’s not only the title that can be seen as a decent and great tribute to DISMEMBER. So, the first two songs already are damn fine ones, but ‘Fortress Of Gloom’ is the first absolute highlight. This one is a solemn groover in BOLT THROWER style, another influence that is a very important column in the sound of REVEL IN FLESH. But they know how to spice the groove – just add some great guitar leads in the Swedish vein, and you’ll get a complete killer! With ‘Servants Of The Deathkult’, you get the best tribute ever paid to the recently disbanded English grand masters of war. The song kills with a grooving D-Beat in mid tempo throughout the verse and ends up in guitar leads in the vein of “… For Victory”. Those Swabians know how to get my full attention and make me an addict! And they use this knowledge to create the monolithic ‘Torture Throne’. Epic Doom / Death Metal in the melodies and the diversified rhythm, but the noble and exalted harmonies in the middle part are hymnal, Gothenburg affine and of a quality I haven’t heard since milestones like “Storm Of The Light’s Bane” and “The Jester Race”. The more I listen to ‘Torture Throne’, the more the song turns out to be my favourite on “Emissary Of All Plagues”and one of my all-time band faves. After this highlight, ‘The Dead Lives On’ picks up the pace again and punches the listener right in the face. So to say a perfect opener for the B-side of the album. ‘Lord Of Flesh’ is a little bit on the safe side in the beginning, but convinces with a nice break plus a catching lead guitar in the end. With ‘Sepulchral Passage’, we get another fast, yet not that spectacular song, speaking in terms of REVEL IN FLESH. Well, other bands might kill for a song like this. The last original song ‘Dead To This World’ picks up a virtue and stylistic device this band developed to perfection: grooving drums and riffing accompanied by finest harmony leads. This would be the perfect end to a great album, but REVEL IN FLESH would not be REVEL IN FLESH if they won’t end one of their albums with a song they didn’t write. For “Emissary Of All Plagues”, they chose the UFO classic ‘Doctor Doctor’. A good choice? My first thought was: “Damn, No!!!”, since that song is a classic that in my opinion can not be improved by any cover version. And REVEL IN FLESH haven’t improved this song on the one hand, but did a surprisingly good job on the other hand. The guitar harmonies fit well in a Death Metal context, so I’m quite pleased with the realization of the song. To sum it up: “Emissary Of All Plagues” is another strong album that stands in line with the great output of REVEL IN FLESH and should definitely please any one of you who loves his Metal the deathly way. More information about the band you will find at http://revelinflesh.jimdo.com, www.facebook.com/pages/revel-in-flesh/304228902958414, label info at www.cyclone-empire.com, www.facebook.com/cycloneempire