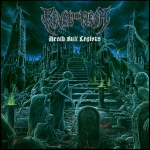 It’s time to REVEL IN FLESH again, because after a bunch of split EPs, the German Death Metal machine is back again with a third full scale attack. “Death Kult Legions” is the name of the album, the first for Cyclone Empire, who already released the 7”es REVEL IN FLESH did with REVOLTING in 2012 and PUTERAEON earlier this year. But asides from the label, the foundations of this albums are well known and tried in the furnace. “Death Kult Legions” was recorded in the band’s own Vault M. studios and mastered by Dan Swanö. And of course the album art was again done by the incredible Juanjo Castellano, continuing his tradition of great work. So, nothing new at the Swabian front? The opener ‘In The Name Of The Flesh’ bribes the listener to believe this thesis, since this one is a classical opening in Swedish Death style, with fine guitar melodies and tons of heaviness. But with the following ‘When Glory Turns To Ruin’, you find something different and even better. Those melodic guitars in a BOLT THROWER vein in the opening segment already sound the horns for something huge to come. A stately tempo with a groove similar to the British godfathers dominates this song, that’s spiced with melody and harmony lines who even slightly remind of early PARADISE LOST. In the beginning, ‘Black Oath Impurity’ takes the same line, rather solemn and epic, even doomy, but as the machine rolls, this one comes along with tons of speed variations from midtempo to speed overkills. Thunder and lightning guides the listener on the way to the ‘Graveyard Procession’. DISMEMBER greets in the intro part, before phat BOLT THROWER- and ASPHYX-styled riffing gets combined with the atmosphere of Swedish Death and crowned by short classic guitar solo by Dan Swanö himself. What will the title track bring? Well, ‘Death Kult Legions’ contains all ingredients of a classic Swedeath song, in a way that just rips the flesh. But be up for another big surprise: ‘Frozen Majesty’ is the most epic anthem REVEL IN FLESH ever recorded, introduced and guided by somehow spooky keyboards and riffing in a Doom Death vein. This very long and unusual song shines in a different light, making it hard to imagine that it’s from the same band that recorded songs like ‘Wings Of Death’ or ‘Culpa Et Inferna’ at first. But it’s just another face of REVEL IN FLESH that both fits the band and overwhelmed me completely. And just as if to prove the real roots of the band, ‘Hurt Locker’ goes back to brutality and the raw and fast Death Metal with the well known alternated vocal styles of Haubersson. But not for long… ‘Cryptcrawler’ sounds exactly as the title promises! Very brutal and slow riffs in a rather pure Doom Metal style create an atmosphere that befits any horror movie. Imagine the creature escaping the crypts to haunt it’s victims… The following ‘As Souls Descend’ is an either doomy tune, very solemn and dominated by fantastic gloomy guitar harmonies that even remind of CEMETARY. ‘Leviathan’ ends up the “regular” album, a song that starts rather hymnic, but speeds up in the middle part just to end up atmospheric and epic, with keyboards reminding me of HYPOCRISY. But wait! REVEL IN FLESH would not be REVEL IN FLESH if they won’t really end up one of their albums with a cover tune. For their first two albums they chose classic Death Metal songs. This time even the choice of the cover tune is a real big surprise, since they picked up the epic classic ‘Necropolis’ that was originally recorded by MANILLA ROAD for their “Crystal Logic” album in 1983. REVEL IN FLESH did a fantastic job and turned ‘Necropolis’ into a Death Metal song that my old buddies at That’s Metal magazine would hate for sure. I simply just love this version! It’s a surprising end to an album that’s full of surprises anyway. “Death Kult Legions” shows REVEL IN FLESH as a band that both manifested their way and opens up for new ideas, thus creating a very diversified album. Maybe it needs a few more run-throughs, only to turn out to be an album which will be heard over and over again. So, still it is your duty to visit REVEL IN FLESH at www.revelinflesh.jimdo.com or www.facebook.com/pages/revel-in-flesh/304228902958414. For the label, go to: www.cyclone-empire.com