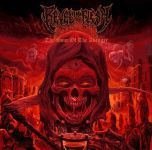 REVEL IN FLESH
The Hour Of The Avenger
(War Anthem Records)
45:03min

God, I love a band that consistently releases new material. Since 2012, Germany’s REVEL IN FLESH have written and recorded five albums. In this day and age with ever-rotating members or dealing with what’s considered “real” jobs (as if writing / recording and touring isn’t difficult enough), Metal bands these days sometimes take a little while between releases. But not REVEL IN FLESH. The best way to set your mark in the music world is to give fans a steady platter of music. Hell, back in the day, bands would release two to three albums a year. And that actually created masterpieces while keeping the attention of their listeners. And guess what… on full-length number five, “The Hour Of The Avenger”, the band hasn’t let up in pulverizing, brutal Death Metal. Bearing the title of the album, the first track opens with blistering guitars and flesh-crawling vocals. If nothing else, the boys know how to crush our eardrums with pure, debilitating riffs and drumming. ‘My Trial’ is a churning, bubbling cauldron of poison, brought to life in a fast-paced delivery. ‘Blood Oath’ chugs along in a fairly simple, yet effective mass of guitars and gurgling vocals. ‘The Nihilistic Nothingness’ is almost a tribute to ’80s Metal with its flanger-like opening and fist-pounding riffs. The fifth track ‘Sky Burial’ is a slowed down beast of a track until ‘Deathblow’ erupts in a thrashy, death-infused punch to the throat. ‘Sinkhole Of Ghouls’ will beat you to an inch of your life as ‘Skull Sacrifice’ will make you wish you had a skull left after the bludgeoning this album will give you. The final track ‘Rock Out’ may sound very familiar since it’s a MOTÖRHEAD cover. For a consistent, heavy, fantastic array of Death Metal, there aren’t many bands that can feed our hunger like REVEL IN FLESH. Pick any album of theirs and you’ll be completely satisfied. But “The Hour Of The Avenger” may just be their best one yet. For more info, check out www.facebook.com/revel-in-flesh-304228902958414, www.war-anthem.de