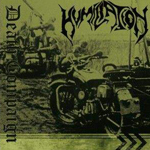 There are things in life that just need to happen. Two bands that love to release split 7”es joined forces to release a… aplit 7”. German Death lunatics REVEL IN FLESH (five splits so far) and the Malaysian war machine HUMILIATION (four splits up to now) did what they love best: entering a studio to record one exclusive song for a small but dedicated label. This time it’s German Brutal Art Records, who already attracted my attention with a fine split 7” of HUMILIATION (how striking) and OBSCURE INFINITY. Since both REVEL IN FLESH and HUMILIATION are among my fave bands right now, my expectations were rather high. And they were fulfilled to the utmost. Everyone who already had the chance to see Bear Bee and his dudes live on stage will surely agree that HUMILIATION are mighty and brutal. This also goes for ‘Meet The Challenge’, the new song on this EP. It’s no use denying that BOLT THROWER had a vast influence on the guys from Kuala Lumpur, both lyrically and musically. But their style still is unique enough to be recognized, also thanks to Bear Bee’s harsh, sometimes even Crust affine vocals. ‘Meet The Challenge’ maybe is the most BOLT THROWEResque song HUMILIATION ever wrote and therefore it fits perfectly on this EP. Why? Just because REVEL IN FLESH show respect to the English grand masters of War Death Metal here as well. The Swabians often enough used slower and brutally grooving elements in their songs before, especially on their later recordings. So it is no wonder that ‘The Ending In Fire’ walks this path again. Of course REVEL IN FLESH use these influences their way and thus recorded another fine groove monster in the vein of ‘Bonecrusher’, spiced with their typical harmony lines and lead guitars. Seems like they’re only able to write fine songs… So, there’s no excuse for Death Metal lunatics of the European school to miss this gem, except maybe for the fact that this split 7” is strictly limited to only 250 copies in three different vinyl colors, 60 on black, 80 on red and 110 on green. If you need more information yet, here are some useful links. Check out HUMILIATION at www.humiliation.my and make sure to like them on Facebook: www.facebook.com/humiliationmalaysiadeathmetal. The same goes for REVEL IN FLESH, in case you still haven’t: www.facebook.com/pages/revel-in-flesh/304228902958414, or revelinflesh.jimdo.com. And for the label, it’s: www.facebook.com/brutalartrecords