More raw brute force from MASTER (CZ)… or is that USA? Paul Speckmann might object. No, this 2005 album features the long-standing Czech-based line-up in the service of its American born, erm, Master. Gnarly, massive, twisting Death Metal riffs culling from a long and ancient vein in the Metal mountain, total heavy power from start to fucking finish. The production suits and hits hard. Lyrically describing struggles within a corrupt, greedy and degraded world. The technocratic future is here, but it’s dim, repressive, dehumanizing… you got to admit his cynicism is well founded. More of the same shit different day only just got deeper. MASTER sounds ultra stripped down and tight on this record in its trademark hardcharging power trio style. MASTER is the make of true Metal. These songs are sometimes long, which can be a drag, but all of them possess a kernel of character that makes this music a different breed than any Death Metal band that doesn’t care to actually write traditionally structured tunes. These songs often hold a killer payload, in the form of ultra heavy crushing riffs that pop in from time to time. For example, the song ‘Does One Feel Pain’ sees Speckmann’s sick bass tone introduce a brutal chopping riff at a midtempo march like Jaws’ theme. The classic MASTER track ‘Betrayal’ squares up with an ancient riff that reeks of SABBATH, good riffs, good pacing, and that inexorable feel from the double bass drums driving momentum. It will roll right over you like a fucking steamroller. This is the 2013 re-release of the 1995 album on High Roller. More info at www.master-speckmetal.net, www.facebook.com/pages/master/18521536017, www.hrrecords.de 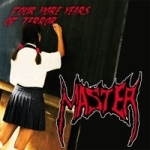 I really have no idea whether it’s Paul himself or the responsible record-label people that he’s constantly dealing with that are choosing the coverart for each new MASTER record… Fact is, that with such dull looking motives no one should be surprised about the fact anymore that a lot of people stopped caring about MASTER a long time ago already. I actually can’t recall one single MASTER album that had a really cool looking sleeve (except for “On The Seventh Day…” and the debut with just the logo on it maybe)… It’s difficult enough to survive these days when you’re playing old school (Death) Metal, so you have to try a little harder to gain people’s attention… and using a cool looking coverart has never been a bad idea in that department. Musically on the other hand, “Four More Years Of Terror” is another solid MASTER offering. As expected it’s composed in the typical straight forward MASTER way, not offering any new classics, but a shitload of very entertaining old school tunes nevertheless. The band (which next to Mr. Speckmann comprises of Alex Nejezchleba on guitar and Zdenek Pradlovsky on drums these days) maybe lacks a little bit musical diversity, which is perfectly reflected in the fact that a lot of the arrangements sound quite similar after a while. So, as a result you’re about to hear full force ahead, double-bass playing in almost all of the 13 new tracks while the foundation of ‘Shoot To Kill’ even reminds me a little bit on what UNLEASHED came up with in their alltime classic ‘Before The Creation Of Time’. But to me all those little points of criticism never really were a big problem though, cause as soon as Paul starts to sing in his unmistakable, unique way, I always like the records anyway. It’s probably pretty much the same you have with MOTÖRHEAD or AC/DC stuff maybe: once you fell in love with a certain simple writing formular, you hardly get rid off your enthusiasm for it. So, all those of you who always liked MASTER (and related projects) can easily go for this one as well again.