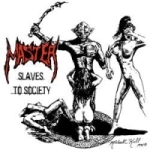 Death Metal veterans MASTER need no introduction. Although they have remained loyal to their original Death Metal ideals and although being one of the oldest bands around, they have never managed to appeal to the number of Death Metallers one might expect taking into account the band’s history. Somehow I fall into that category as well and I really can’t explain why I was always biased against their releases. And I would still be if only Frank didn’t give me a hint that their latest album “Slaves To Society” actually deserved a chance. First of all, I totally respect the fact that bands such as MASTER were responsible for bringing 90s Death Metal into shape and I feel very “small” to say anything negative about them. But my opinion is that MASTER’s career has never been that “impressive” in order for the band to stand along the big names of the early 90s (to Frank: there is a chance that I might be wrong). Still, MASTER – although never made it big – keep on releasing material every couple of years proving that they have not given up! Their latest effort, “Slaves To Society” is by all means a decent Death Metal album. It has all elements that make it a fair choice for all old school bangers: suitable production (giving the appropriate old school feel), sharp guitars, solid bass / drums. Everything seems to be according to the good old Death / Thrash recipe yet I somehow feel that MASTER – although giving a serious try – are not able to make it to the top. I mean, although they’ve managed to create an honest record, still, they are not able to distinguish themselves quality-wise from the rest of the scene, which unfortunately results “Slaves To Society” being a complementary release and not a major one (the cover artwork does not help a bit). Although I don’t like comparing bands I will do that here only to justify my point. I recently listened to the latest MONSTROSITY and IMMOLATION albums. I mean, both bands have presented impressive material that proves that they are both in great shape and able to distinguish themselves from the rest of the scene. Unfortunately – in my opinion – MASTER don’t do the same, but on the other hand, perhaps I am completely wrong and MASTER simply want to remain a pure, underground band that only releases stuff to please a couple of dedicated MASTER-maniacs. But as far as I am concerned, I expect a bit more… So I guess you should give it a listen before deciding to buy it! Opinions might differ! www.master-speckmetal.com, www.twilight-vertrieb.com. 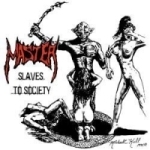 MASTER mastermind Paul Speckmann is a legend in the Death Metal community, many youngsters might not know who he is, but the grand old man has been dealing with Metal since the start-80s and is still going strong. Since the inception of MASTER in 1983, it has been his main focus, even though he has had numerous other bands, and helped out in, almost, even more, and I am sure many have met him manning a merch stand or 2 during various Death Metal gigs around the world. MASTER has never been my favorite Speckman band, that has always been ABOMINATION, a band that roamed the first few years of the 90s and delivered 2 really good albums in the self titled debut and then "Tragedy Strikes". Though to be honest the sound was never that far off the first 2 MASTER albums, which were released within the same years, a bit crossover-thrashier and more straight forward and not that many growls as in MASTER. All that brings us to the year 2007 where we saw the release of this ninth full length album from MASTER, "Slaves To Society", re-released in America by Ibex Moon Records with 4 demo tracks added to the original track list, which is the one reviewed here. After some soul searching within the genre, it seems like MASTER have found back to the virtues of the 2 first albums, the self titled debut album and "On The Seventh Day God Created… Master". A good deal of heavy Death Metal with the early touch of thrashier Hardcore / Crossover elements and some catching riffs together with pounding rhythm patterns. There is a lot of focus on drive and intensity on this album, the guitars, both riffingwise and leadwise is driving the music forward all the time. We are getting some good and heavy baseriffs and to season it, we are handed leads én masse, some really good and extravagant, others for the sake of it, but mostly good. The drumming is good and hardcore to the point, effective and blasting, and the growl from Speckman is as, almost, always good and piercing the ears, the good old bastard child of a growl and a hardcore scream. "Slaves To Society" is a well crafted and lasting album with some strong pieces that makes it strong and hardhitting. The full fledged return of the crossover hell is awesome, and where the band is rooted, brutality for brutality’s sake is not always the answer. And the 4 demo tracks reminds me very much of ABOMINATION, fucking cool! "Slaves To Society" is one of the better MASTER albums in recent years (I have teleported myself back to 2007, and don’t know what’ll happen in the future), quite catchy and a return to good old deeds keeps the album running steadily throughout the length of it and is not only consisting of a highlight here and there, as many of the earlier albums have been. A good worked through piece of Death Metal by a band that’ll in time get their respective place in Death Metal history, even though, people are taking their time to acknowledge the works and impact of Mr. Paul Speckman. The addition of the 4 demo tracks to the original tracklist is a nice twist, 4 good tracks in a raw, playful and uncompromising form, headbashing Metal for bleak mornings! More info at the following sites: www.master-speckmetal.com, www.facebook.com/pages/Master/18521536017, www.ibexmoonrecords.com