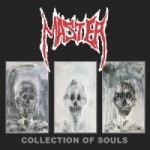 For many, MASTER were a key influence in the Death Metal world. Regardless of the merits the music has – historically, MASTER were highly important. They remain comparatively unacknowledged today, despite the fact that both MASTER and DEATHSTRIKE – a side project of founder Paul Speckmann – influenced everyone from DARKTHRONE to ENTOMBED. "Collection Of Souls" is the album time nearly forgot if we exclude the impossibly ill-conceived "Faith Is In Season" album. With such richness of numbers Death Metal bands experienced in the early 90s, and taking into account that MASTER were, even by 1993, ancestors of the scene, it’s not too surprisng that "Collection Of Souls" should have fallen under the radar. Now, more than 14 years after it was originally released, Displeased Records have re-released the album, along with the long forgotten 1995 "Final Word" demo, and an equally obscure split with EXCISION done in 1996. "Collection Of Souls" is where MASTER slowed down. Not dramatically slowed, but just enough to allow the classic Rock and Punk influences to shape the songs. Hearing the MOTÖRHEAD and DISCHARGE on tracks like ‘Taste Of Insanity’ and ‘Blinded Faith’ is easy, especially after hearing "On The Seventh Day…" and the immortal self-titled record. MASTER remain a relatively undiscussed name in Death Metal, but their presence has yet to fade. The booklet’s re-release also features an interview with Paul Speckmann as well as all the lyrics, while the color of the cover was changed to black. For more info check out www.displeasedrecords.com, www.master-speckmetal.com, www.myspace.com/masterspeckmann