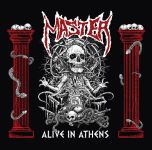 MASTER are one of the earliest Death / Thrash bands and, after all this time, they are still brutal and kicking ass. About a decade ago I started considering myself lucky for Paul Speckmann having moved from the USA to the Czech Republic, since because of that he started touring Europe with frequency and so in the following years I had the chance to watch MASTER play live several times, with a magnificent line-up on stage to make it even better. During that time the band was also quite prolific, releasing numerous records, including several live albums, of which this is the most recent one, offered in a number of versions, namely black vinyl, red vinyl, marbled vinyl double LP and digi CD. And indeed it’s great to realize that they are still as fast, alive and kicking as always. The sound quality is very raw – conveying much of the feel of the live experience – and you get treated to some of the classics of MASTER’s repertoire. I was a teenager back when I bought the debut LP (one year before buying the sister band DEATH STRIKE’s album) and it will always take me back to hear crushing songs like ‘Re-Entry And Destruction’, ‘Remorseless Poison’ or ‘Pay To Die’. In this case within a setlist of nearly 70 minutes going up to their 2016 album “An Epiphany Of Hate”. 2016 is in fact the date of this Athens gig and so we still get to hear the very good Czech members Paul Speckmann had in MASTER until 2019, namely guitarist Alex Nejezchleba and the truly remarkable drummer Zdenek Pradlovský destroying everything in their path. So if you are a fan of MASTER this is a fine taste of what they sound like on stage. Paul sings like a rabid madman backed by precise and brutal playing. www.facebook.com/therealmasterofficial, www.facebook.com/dhmprecords